Home Uncategorized ‘Colombia, A Comedy of Errors’ is No Joke

After close to four years of living in Colombia, I like to consider myself well-versed in the country’s history, its culture, political and economic life. So I am of two minds when it comes to Victoria Kellaway’s book ‘Colombia, A Comedy of Errors’. The first is that this ol’ dog has a lot of new tricks to learn – and he’s learned them from this book. 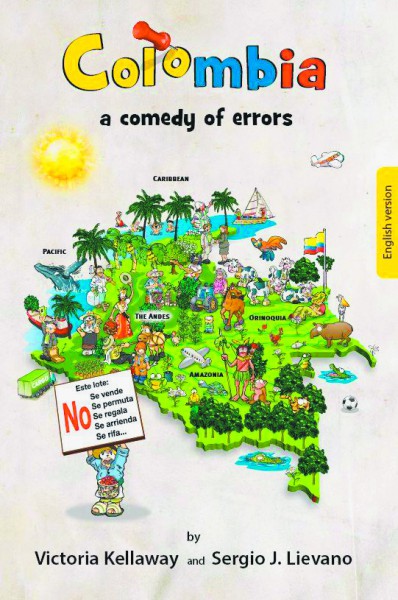 The other is a worry of how the work’s upbeat yet at times pointed critique of the country will be taken by the average Colombian once the book hits the shelves in Spanish. Colombians are a proud people and quickly get defensive when they feel any of their country’s flaws come under attack by a foreigner.

The book, which should do well in the English-speaking-visitor-to-Colombia market, is by far the most well-researched and easily digestible source of information about the country’s 500-plus year history, in a neatly packaged 151 pages (which are masterfully illustrated by the renowned Colombian cartoonist Sergio J. Lievano). But the narrative and its illustrations – wholly unintentionally, I presume – serve to laugh at Colombia rather than with it on too many occasions.

Kellaway’s love of the country is apparent in her writing. But it is nearly impossible to write about any aspect of the country which so many gringos have come to love and call home without criticising its at times inexplicably violent and tragic history.

But all that which we expats feel about this history is intellectual, mainly by ink-stained fingers from many a turned page. So many Colombians, on the other hand, instead feel a very raw, emotional wound for having lost loved ones in the senseless and decades-long paramilitary-guerrilla-army-drug cartel slaughter-fest.

So Kellaway can be forgiven, then – to cite a phrase which she uses multiple times in the book – for casting her infinitely positive light on a country still freshly awash in blood.

In the end, the author’s assessment of ordinary Colombians is realistic, fair and balanced, and she suggests that it is this group of people who offer the best hopes that Colombia can recover from its dark past.

ECM Records: Between Sound and Space