Colombia has plenty of room to improve when it comes to gender equality, particularly in sports and especially in soccer. Professional athletes playing for the women’s teams have denounced sexual harassment by their coaching staff, pay inequality relative to men’s teams, and claim that their complaints have been repeatedly ignored by senior executives Federación Colombiana de Futbol (FCF). In retaliation to the media scandal, the FCF has canceled this year’s female league, alleging economic reasons. The FCF’s claims are bogus and rampantly sexist. We have to improve, especially if we want to host the Women´s World Cup in 2023.

Colombia´s professional female soccer team, otherwise known as the Chicas Superpoderosas, have been on the pitch since 1998. The team has played two world cups and made it to the knock-off round in 2011. In 2017 and to great fanfare, the Colombian Soccer Federation (FCF) launched the women’s league, which soon paid dividends with the female Atletico Huila team winning the Copa Libertadores, the most important South American cup at the club level. There are many Colombian female athletes representing the country abroad and their list of accomplishments is long.

While women are proud of their glory, they are also demanding fair treatment. Colombia´s female soccer stars have come out to denounce unfair and sexist treatment from the directives. They claim that they are poorly paid, that they have been subject to sexual harassment by coaches and staff, and worst of all that they have complained about this to the FCF and have been ignored. At a time when the soccer establishment should be most supportive of the team, they have come to cut their wings. The FCF announced on March 6, two days before International Women’s Day that it would cancel the 2019 Women’s soccer season, in what looks like retaliation against the players.

What is saddest about this whole affair is that women’s soccer has the track-record that demonstrates they can field successful teams, that they can win championships, and they can make the league profitable. The FCF has said that they would rather shut down women’s soccer entirely than act against coaches and staff allegedly implicated in the scandals. The lack of women involved in FCF leadership is notable and has to be addressed, more so if Colombia aspires to host the 2023 Women’s World Cup.

Women soccer players claim that they need better economic support. According to their complaint, many women work, study and head households in addition to representing the national team at international competitions and they do not have their minimum economic requirements met by the meager salaries paid for by the FCF. This is not the worst of it—some players claim that they have had to pay their own expenses to train with and represent the national team and that they don’t receive per-diem for these trips in contrast to the male teams who travel in first class or charter airplanes to national team matches. They also claim that in spite of winning cash prizes the women do not receive the bonus. There are allegations that women have been shortchanged on prize money for the 7th place in the 2015 World Cup and winnings for the Copa Libertadores Championship (the female team of Atlético Huila won the 2017 cup, a feat that the men’s team have never accomplished). I believe the women.

Women soccer players also claim that they have been subjected to sexual harassment by the team’s coaching staff. In a timeline of events well put together by Futbolred the story goes as follows: According to a complaint by members of the women’s under-17 soccer team, former coach Didier Luna and team doctor Sigifredo Alonso made unwanted advances to players – then minors! They claimed that members of the staff touched their bums, tried to kiss them, and engaged in sexual innuendo. Luna claimed no wrongdoing, while the FCF said that no formal complaint was lodged. However, the media caught wind of the story and forced other parties including the Ombudsman, the Attorney General, and the vice-president to get involved in the investigations into possible criminal behavior. Again, I believe the women.

In the world of Colombian soccer, there seems to be a consensus for denial especially when it implicates federation executives. It happened when racketeering charges were brought against people selling tickets to Russia World Cup Qualification matches. It happened when hundreds of millions of dollars were used to bribe officials to vote on the 2022 World Cup in Qatar – which has the former head of the FCF Jorge Bedoya under a cooperation agreement with US authorities. It is happening now with sexual harassment.

However, the responses in the different cases have been staggeringly different. In the racketeering case, the FCF agreed to let go of the contractors used to buy and sell tickets – and examine its current practices. In the Fifa-Gate case, the FCF fired its chairman Luis Bedoya and agreed to internal investigations. In the case of the gross wage-monetary reward inequality and sexual harassment of female players, the FCF decides to cancel the female league?

Let’s just call this what it is: Retaliation for women speaking up. For women refusing to allow themselves to be touched or used for sex to advance in the game. For women endangering the reputations, jobs, and potential freedom of federation execs who willingly or negligently ignored the accusations. Women, not surprisingly, are not represented in the FCF Executive Committee – the maximum body that makes decisions in Colombian soccer.

Let’s face it. What burns most about the case is that the investigations into the women’s allegations are likely going to take years to resolve. But the consequences of the FCF decision to cancel women’s soccer for the season are going to be immediate. They will affect the players who have made Colombian soccer competitive not only locally, but globally. They also set up the government for an embarrassment, as it has offered to host the 2023 Women’s World Cup. Will FIFA agree to allow a country with no female league to host the most important event for the sport? That depends on how strongly the three women out of 24 on the Organising Committee for FIFA Competitions speak up against it. 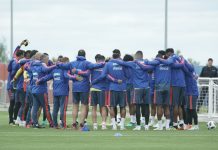