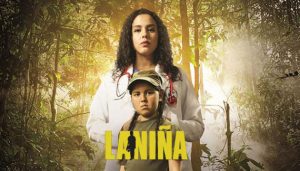 La Niña is a new series which follows the life of a woman trying to escape her past as a guerrilla fighter in a fitting story for Colombia’s current situation. Jazid Contreras speaks to the director

Caracol TV is currently airing its latest prime time show, La Niña, a fictional drama series based on the true story of a former guerrilla fighter who quits war and begins the process of reintegration into civil society. Forced as a child to join an illegal armed group, Belky, the main character, attempts to leave her past behind and fulfil her dream of becoming a doctor.

Even though the show deals with the Colombian conflict, it distances itself from the very profitable ‘narco-soap’ genre. It constitutes a gamble by the network because it mirrors the current situation of Colombia, a nation looking to overcome its violent history and build a peaceful society.

The Bogotá Post had the chance to talk to Rodrigo Triana, La Niña’s co-director, who explained his views on the relevance of this work of fiction.

Jazid Contreras: What caught your attention about this project?

Rodrigo Triana: When I heard about this project I was thrilled to be part of it. This is a story that affects us all, it’s part of a very important process that our country is going through. I think it’s going to make a big impact on people’s minds.

JC: How do you reconcile the tasks of telling a true story and making an entertaining show?

RT: Well, that’s just our job as artists, isn’t it? This is certainly not a documentary, we have to entertain the audience by telling a compelling story that has tension, conflict and suspense. It’s our challenge to create interesting characters that the viewer can relate to and also that make people want to talk about the show.

JC: Tell us about the leading actress Ana María Estupiñán.

RT: She’s a true actor, outstandingly talented. Her immense talent and sensitivity are obviously present in everything she does.

JC: This show is presenting us with a bunch of young actors. Is it challenging for you to deal with?

RT: I’ve always worked with young performers. It’s a pleasure for me to pass down some of my knowledge, I try to teach them something new and help them become better at what they do. I just hope I can help them improve their careers.

JC: What can you tell us about the artistic approach of the show?

RT: Aesthetically, this show has a lot of my own style imprinted on it. It’s very ‘Rodrigo Triana’. Beyond visuals, I like to focus on the actors, on creating characters that seem plausible and realistic, but also unique.

JC: As a director and as a Colombian, what have you learned from this story?

RT: I’m all for the peace process. I can only speak for myself. We’ve been living in war for way too long. History has taught us that violence is not the answer. It’s important to tell stories about people who want to quit the war and ‘come back to life’, so to speak. If we don’t give them a chance, then ending the war is impossible. I think forgiveness is the only way for us to build a peaceful nation and that’s what this show is about. 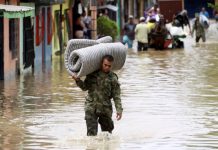