The Colombian football league is about to kick off a new season, with the opening game expected to be on January 29. In 2015, Colombian football went out with a blast, with international success for Independiente Santa Fe, while at home Atletico Nacional won the league, stealing the long-held record for league victories from Millonarios.

Santa Fe took their first Copa Sudamericana title against Argentina’s Huracán. Following a goalless away draw a week earlier, the lacklustre home match ended with the same scoreline. But the Cardenales came through on penalties, with goalkeeper Zapata giving the team plenty to celebrate as Santa Fe earned their first ever international title. Santa Fe’s Venezuelan midfielder Luis Manuel Seijas was later picked by Uruguayan newspaper El País in their South American team of the year for 2015.

Atlético Nacional claimed the Liga Águila title. The Verdes from Medellín got the better of Junior de Barranquilla in a decisive penalty shootout. The Tiburones dominated the home game, at times battering Nacional, making the 2-1 score something of a generous result for Nacional. Just 29 seconds into the return leg in Medellín, Marlos Moreno, who is rumoured to be on Chelsea’s radar, left the Junior defence for dead and evened the aggregate score. Another 89 minutes plus stoppage time without further goals sent the game to a penalty shootout, after which Nacional celebrated their fifteenth title, with the penalties ending 3-1.

In 2016, Santa Fe, Nacional and reigning Apertura champion Deportivo Cali will represent Colombia in the Copa Libertadores, on the quest for more international silverware. In the domestic league they will be title favourites but with the transfer carousel running at full speed, anyone could come out on top. The Bogotá Post will keep a close eye on the teams and bring you a comprehensive preview in the next edition. 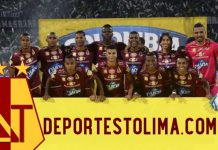