Beware the buseta, the pothole and the basuco head. Consider yourself warned!

OK, so you’ve been out and picked up your bike, it’s your first time riding for a while and you need to know you’re not in Kansas anymore. Bogotá is a good, bad and ugly city in equal measures, but as long as you know what you’re dealing with, it’s an easy enough city to cycle in. It’s just a little…unique, like that strange uncle that turns up at Christmas who you don’t really know and you’re a little afraid of him after he’s downed his thirty-third whisky. Here’s some tips on some of the little quirks and peculiarities you might not have experienced before.

Busetas are a pain. Of all the things people cite as reasons not to cycle, the busetas are probably the only one I really agree with. These lumbering, juddering behemoths are to be treated with caution. You might be able to dodge them easily enough, but one hit could take you out. There’s a whole lot of things they do that will seriously piss you off, so the best advice is to just stay as far from them as possible. They have a habit of swinging across the road like a pair of old man bollocks, spew out hordes of pedestrians as ghastly as their fumes and care not for stopping incessantly, seemingly just to piss everyone else off. You should also be aware that they have a charming habit of indicating left just before pulling a hard right.

You have to know your routes in Bogotá much more than in other cities; one of the joys of cycling a new city is idly spinning around backstreets, but here that could lead to problems, whether it be a mugging, falling down an enormous hole or just getting lost in the ‘grid’ system that appears to have been designed by a dyspraxic hamster. Also, for some reason, many Bogota roads have no lighting. This is a real hyper-pain.  Blame Petro, Santos or whoever your preferred folk demon of the day is. The wrong road can also resemble the surface of the moon and even on regular routes you would do well to make a mental map of where the worst huecos are.

I was told early on when I arrived in Bogotá that there’s no Spanish word for spatial awareness. After initially dismissing this as the rambling of a bitter expat, I later realised that it’s either largely true or Rolos like to amuse themselves in traffic by arranging little shapes to impress people looking out of high windows. My favourite phenomena are when cars arrange themselves in zig zags, alternating between the far right and far left like confused mamertos, when they line up in diagonal lines like rugby backs, or when they all straddle the lane dividers as if they were scalextric cars. At other times, they simply become a mess, arranged like clichéd gravestones or English teeth.

Worse than this is the lack of awareness from pedestrians. The roads are fairly safe, but the reason there are so many traffic accidents is that almost nobody bothers to look before crossing the road. As a cyclist you may well also simply be ignored by most people who will just wander on out anyway, without even the good grace to do the funky chicken. Drug-addicted homeless people are a menace, as they care a hell of a lot less than you do about any possible collision and move like chessmen, either in diagonal surges of bishops, hopping curves of horseys or pawnstorms with aggressive sideways jolts.

There might no longer be any abused horses forced to walk the streets pulling carts, but as Rolos care less about humans than animals, you still have guys with carts to deal with. These fellas do go contraflow, but there seems to be an assumed rule that they only go contraflow on the far outside. Have the decency to go round these guys with respect and good manners- you’re not going to make anyone’s life easier by joining the tooting multitudes of 4x4s complaining about the existence of poor folk. Street performers are the same: you often get a clown show or juggling display to enjoy as you filter through the traffic, though beware of the fire breathers or knife users – try and keep a $1,000 peso note in an easily grabbable place to hand out. On a brighter note, there are still llamas in La Candelaria and if you don’t get a little thrill of joy out of seeing a llama you should probably get hold of a shrink.

Almost every good bar/cafe etc. will let you sling a bike inside. This means you can actually get around quite easily despite not even owning a lock. This makes moving your bike around the city a damn sight easier. I’ve never in my life seen such an acceptance of bicycles as a standard form of transport or indeed as a perfectly acceptable ‘in the building’ item.

Speed is not so popular in Colombia -due to the presence of cheap cocaine – oh wait, wrong type of speed – because of people’s general tranquillity. Bogotá drivers get off the lights with all the speed of a striking slug. Once you get round slamming into the back of people, it’s quite enjoyable – you’re like a sped up kung fu actor, zipping through static lines of cars. Especially fun is changing up the gears and thundering along in the fast lane overtaking car after car in moving, open road. Only 45-50kph but still enough to rocket you past all the fools in 4x4s.

So there you have it, kiddies. Some of the peculiar things that make cycling in Bogotá that little bit different from your home town. Hopefully with all these in mind, you can get more out of your regular spins and understand the city that little bit more.

Heroes Of The Future 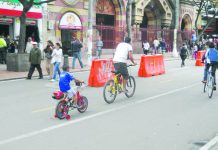