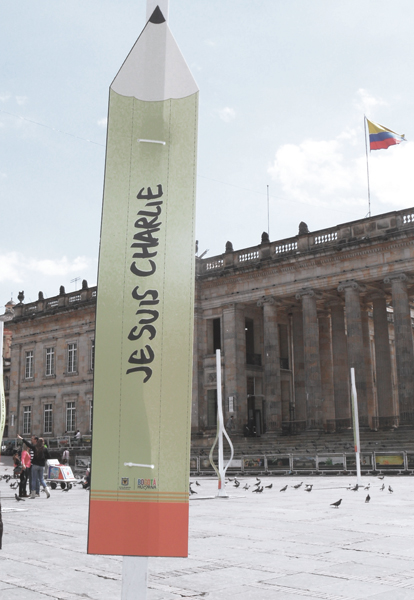 Free speech is an emotive issue – as the range of knee-jerk reactions to the Charlie Hebdo crisis demonstrate. First is the charge that all speech should be free and any restriction of this is tantamount to repression. Well, this is clearly not true – hate speech is rigorously controlled in most countries and cases such as holocaust denial are routinely treated as criminal acts. Kids walking around in public wearing “Jesus is a dick” T shirts are usually told by coppers to put a jumper on or take a trip to the cells. Why?

Because their right to free speech is balanced against public decency.

Furthermore, it is important to remember that human rights are complex concepts. They are ours and we control their usage and define their appropriacy according to our norms. Freedom of expression is not like gravity – it’s not something that exists in the natural world.

Next came the argument that Muslims (a nicely homogeneous block of a billion or so people spanning the globe) should accept the cartoons without criticism. Clearly this is nonsense – free speech comes with the right to reply.

Free speech is not, and never has been, the duty to piss people off. With free speech comes a responsibility to use it in a measured way. This becomes especially important when one considers the rationale behind comments and the impact they are likely to have.

After that came the accusations of racism against the magazine. Most of these accusations were made by people who did not necessarily understand the French text that accompanied the cartoons, and who did not comprehend the specific details of their context.

For example, the widely reproduced picture of the French Foreign Minister as a monkey was actually a rather scathing comment on the way Le Pen (France’s foremost racist) had behaved previously. Several of the cartoons were vitriolic in their attack on religion; a few of the cartoons were funny; a few cartoons crossed the line of decency; many were open to misinterpretation. To take from this, however, that the magazine as a whole was racist is somewhat of an over-elaboration.

Satire specifically and comedy in general has seemingly been elevated to a level it doesn’t deserve in the midst of all this. It’s being routinely reasserted that one can say what one likes in the name of a joke.

Well, no, jokes follow the same rules (not laws) as everything else. Also, satire is meant to be directed at the powerful. Those who simply mock the weak are nothing more than hectoring bullies. Taking the piss out of all Muslims is bang out of order – mocking the hook handed hate cleric or making Talibanter is a different story entirely. And arguably at times Charlie Hebdo may have crossed this line.

Next came the assertions that no religion should be uniquely protected, that one should be free to criticise any religion in any way. A common refrain was “you can say what you like about Christians but not Muslims”. The fact is that Islam is impugned far more regularly and in much more serious terms than any other religion. At least one UK paper will carry some bullshit story scaremongering about Muslims every single day.

Then the whataboutery came in – what about Boko Haram, who killed 2,000 people last week? What about attacks in Syria/Jordan/Palestine? Well, what about them?

Referencing any other troubles of the world is no more relevant than trying to compare chalk and cheese. What about if someone supported the killers – would that be OK? Well, same answer as to the cartoons – it would be in bad taste and if someone were to attack them physically, that would be illegal.

And in the end, what do we have? A lot more speech, all of it free but not much of it helpful nor considered. I was asked for an opinion but I would say only this: before giving your opinion take some time to consider and think through all that you see.

We live now in an age where information is available in unprecedented levels, yet few people seem to bother using it, instead simply regurgitating what they’ve read or seen and never bothering to scratch under the surface. Reject the simple answers to a complex situation before giving your opinion.

Be sure to read our full Charlie Hebdo coverage here, here and here