This month there are two not-to-be-missed events in the capital of free festivals and fiestas, Linda Gómez has the low-down on Colombia al Parque and Jazz al Parque

Bogotá boasts multiple open air activities, which, thanks to a sizable investment from the city can be enjoyed al gratín, that is, for free. It’s a way of making sure that the public has access to a range of cultural events, as well as providing a stage for local talent.

Colombia al Parque is a family-friendly event that showcases regional music from all over the country, and is guaranteed to get people dancing to some traditional rhythms. Starting at noon in the Parque de los Novios on August 20 and 21, this diverse cultural encounter will feature ten of the best local groups, five national groups, and one international guest.

At the inauguration event in the Universidad Jorge Tadeo Lozano, 80-year-old La Negra Grande de Colombia will show audiences he is still going strong and treating them to classics such as ‘Yo me llamo Cumbia’.

Right now, the possibility of a peace agreement pervades many of the activities and events in the city, and this one is no different. Giovanna Chamorro, musical director for the District Institute for the Arts (Idartes) tells The Bogotá Post that there will be artists who can talk about the conflict as well as music that talks about resistance.

“Colombia has a history of conflict, and much of it is based in the regions. The music of these regions is very diverse and distinct.” She adds that this event will be “a space for sharing, not for confrontation.”

Local group, Absalon y Afropacífico, will no doubt dominate the stage as they mix Pacific sounds with energy from the capital. Then there’s Los Parientes, whose 20-year musical career includes an ample repertoire of carraguera, which highlights Colombian campesinos and their humour.

Many of these groups will also take part in the 2016 Bogotá Music Market (BOmm), an event by the Bogotá Chamber of Commerce that is becoming an important music expo and a platform to promote the Colombian music industry.

More than a thousand applications were received, but only 252 groups were chosen to participate in the conference that will take place on September 14 and 15 and which will gather together over 170 buyers from around the world.

Jazz al Parque, now in its 21st edition, will again be held in Parque El Country in Cedritos on September 10 and 11. After a bonanza last year to celebrate their 20th anniversary, this year it will return to the original format and will no doubt be enhanced by its alliance with Teatro Mayor Julio Mario Santo Domingo and the Big Band Bogotá.

Chamorro tells us to keep our ears open for this year’s line up, which she says will have some “interesting surprises”. The event promises both international and national guests from various genres of jazz to delight its audience.

“It’s also important to help raise the profile of Bogotá artists and develop local talent”, she says. To that end, auditions for local artists have just finished and the winners will be announced soon.

Both the academic and artistic components are important in this quintessential family outing which, with its food tent and plans for a host of other activities, will be more than a home to beautiful rhythms and tunes.

Some of the international artists playing over the weekend will be –

ECM Records: Between Sound and Space 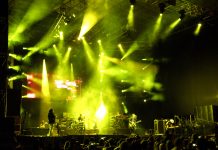