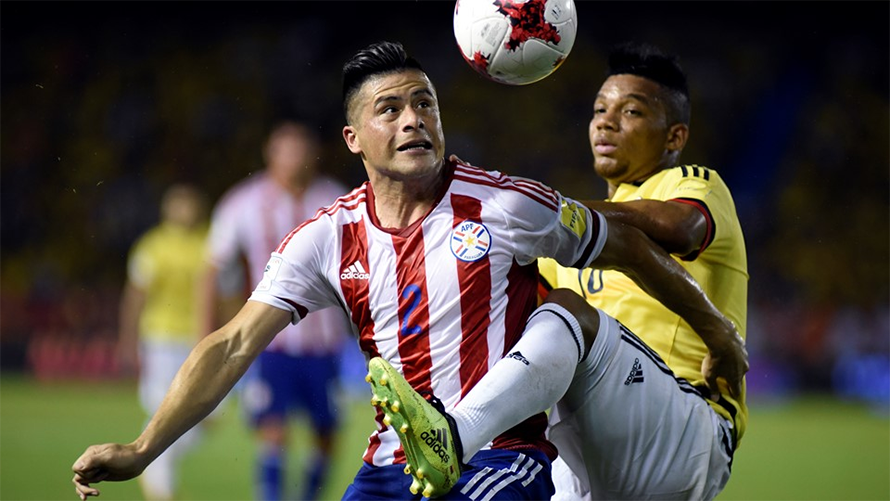 Colombia snatched defeat from the jaws of victory when leading 1-0 in Barranquilla versus Paraguay five minutes before the end of the game, but conceded two goals. Now, it comes down to the final game in Lima against Peru.

Colombia had won the last five games versus Paraguay, four World Cup qualifiers and at the Copa America 2016 in the USA showing their sovereignty over the Southern opponents, but the start was cagey.

Early yellow cards for Richard Ortíz for Paraguay and Frank Justy Fabra after a badly-timed tackle on Martin Cáceres of Colombia marked a feisty first 15 minutes. Paraguay’s captain was subbed off for injury after 38 minutes.

The game opened up after 25 minutes when Paraguay attacked Colombia’s right side which Arias left unguarded. Derlis Gonzalez beat David Ospina but found the post in his way. Colombia got the warning and almost struck back immediately when Edwin Cardona walked through the defence while failing to pick a corner to find Paraguayan goalkeeper Anthony Silva. At 35 minutes, Davinson Sánchez was close with a header that went wide but there was no more excitement until halftime.

The thundering speech Pékerman must have given at half time worked, because two minutes into the second half Juan Guillermo Cuadrado put Anthony Silva under fire. The goalkeeper responded well. James Rodríguez almost tipped the following corner in, but the ball went wide.

Both teams went for the win and the game opened up. However, the scoreline didn’t change until 78 minute mark when Yimmy Chará took advantage of a sleeping Paraguay defence, playing a perfect through ball to Falcao. The in-form striker hit a cheeky lob over Silva to take the much-needed lead for Colombia.

Pékerman put everything into his defence when he took Cuadrado off for Boca Junior’s midfielder Wilmar Barrios. Unfortunately, his strategy didn’t work.

In the 89th minute, a miscommunication caused the equaliser. David Ospina and Christian Zapata smashed into each other after a Paraguayan free kick and Oscar Cardozo gobbled the free ball right up.

Colombia didn’t give up and Santiago Arias missed an absolute sitter after outplaying goalkeeper Silva. In the counterattack, the grapes went even more sour for Colombia when Antonio Sanabria scored the Paraguayan winner two minutes into stoppage time.

On October 10, Colombia will meet Peru in Lima. A victory will secure qualification for Colombia, while a draw could see Colombia in, but it’s not a guarantee. A defeat will shatter los cafeteros’ chances at qualifying for a second World Cup in a row.

Colombia vs Bolivia: home side need a victory to keep Qatar dream alive