Álvaro Uribe retains power as the Centro Democrático gains the most seats in the senate, plus the first democratic appearance for the FARC.

There were over 2,700 candidates representing the entire political spectrum on the ballot sheets at the legislative elections. While very different from the upcoming presidential election, the vote was significant for several reasons. Firstly, it was the first time that the newly-formed political party of the FARC had fielded candidates. Secondly, according to Defence Minister Luis Carlos Villegas, “It was the calmest in terms of electoral violence and public order offences in at least two generations of Colombians.”

Voters had the opportunity to elect candidates for both senate and for congress when they went to the ballots on March 11, while also participating in the two parties primaries. The day saw plenty of drama, the most notable of which being furore over a lack of ballot papers, but when the dust settled there were only a few surprises.

Mockus’s centre-left Alianza Verde picked up five more seats to take them to ten, while the Polo held their ground with five seats and the newly-formed Decentes coalition took four. The FARC only got 0.34% of the vote but nevertheless their newly created political party got the five seats in each house guaranteed to them in the peace agreement.

Voting was marred by controversy with various videos circulating on social media showing ballot paper shenanigans. What does seem to be clear is that certain polling stations ran out of ballot papers. That ended in farcical scenes, with the registraduría – the organisation responsible for organising the elections – stating that photocopies of the ballot were legally acceptable for voting. Both Duque and Petro complained of irregularities – accusations that will surely set the stage for further issues when the Presidential elections roll around in May.

Abstention was another strong theme. While we saw the highest turnout for congressional elections in history, still more than half the ballots in the country were not cast. Added to this were a further 850,000 votos en blanco – people who chose to vote, but rejected all the available options – leaving a disappointing total of 15,000,000 votes cast for candidates, less than a third of Colombia’s population.

Five things you might not know about election day

On February 9 this year (just a month before the elections), the consejo del estado ruled that voting fraud had caused three Movimiento MIRA senators to lose their spots in the last elections. They were reinstated and Centro Democrático, Partido Liberal and Opción Ciudadana each lost one seat. This year they are in the senate with three senators.

The indigenous communities are constitutionally guaranteed minority seats in the senate. Unfortunately, there are no clear winners after voto en blanco won with 68% of the votes. That means there will have to be a new vote – a rule the two top candidates argue does not apply to minorities.

Jeyffer Tadeo Rentería Lozano (aka rapper Don Popo Ayara) ran for senator on a Cambio Radical ticket, but voters perhaps found the idea of a Cambio Radical rapper oxymoronic and he didn’t get elected.

Citizens of Magangué complained that unspecified politicians were buying votes with falsified money. One declared to the local press, “I am going to report it, because they are buying my vote with false money so I have to report it.”

Opción Ciudadana – a right-wing party which has been linked with paramilitarism on several occasions – lost its place in the senate after failing to achieve the minimum vote requirement. 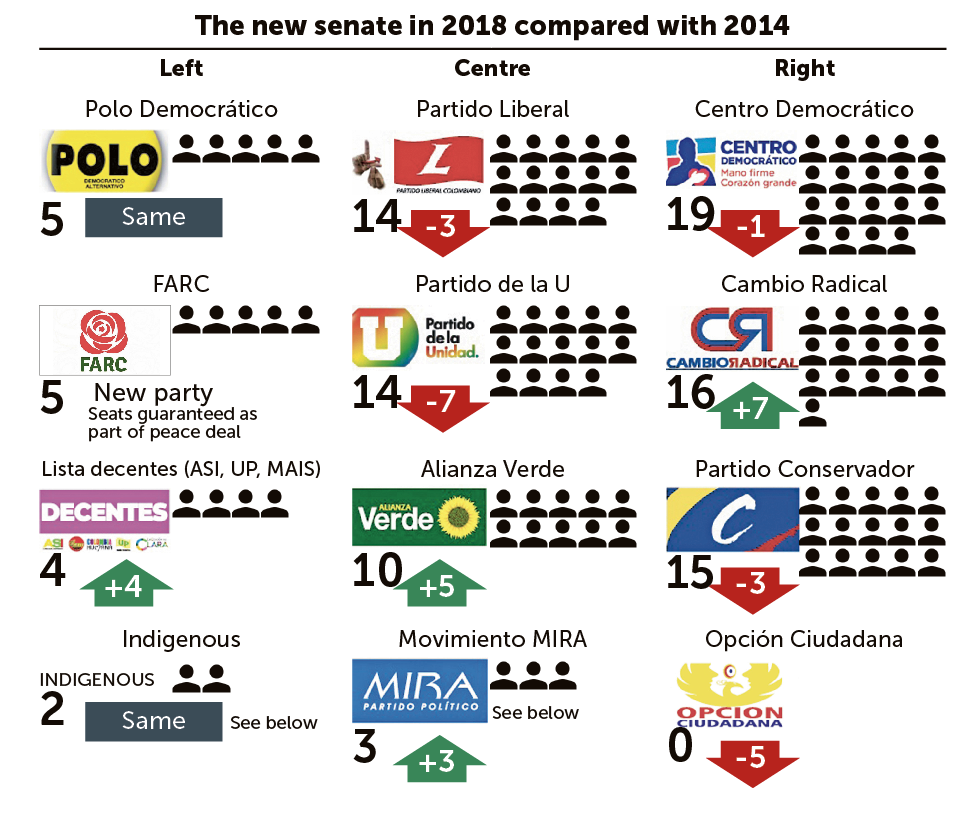