According to a study by European Union project Environmental Justice Organizations, Liabilities and Trade (EJOLT) released this week, Colombia scores first in the continent and second in the world for environmental disputes.

Colombia currently has 73 ongoing environmental conflicts. The findings in a new study by the European Union come at the same time as the drought in Casanare, where an estimated 20,000 animals have died.

Casanare has been in a state of drought for a month. Santa Marta is also suffering drought conditions. The Red Cross and the Disaster Risk Management Unit are providing water to both affected regions.

In total, seven departments in Colombia are being affected by drought: Boyacá, Casanare, Chocó, Córdoba, La Guajira, Magdalena and Santander. Colombian NGO’s have criticised the government’s response. A spokeswoman for APROFAC (Colombian Animals and Environment Protection Association) said “As a Colombian, it hurts me that animals on the route to extinction are dying.”

Some sectors have suggested a link between the drought in areas such as Casanare and oil and mining activities in the area, an accusation which locally operating oil companies such as Pacific Rubiales deny. 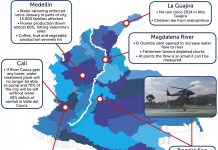