Home In This Edition Whitewashing in Colombia: does the industry continue to disappear darker-skinned faces?

Last week, a casting agency posted on a Facebook group for expats in Medellin, hoping to fill roles for a Coca Cola ad. The posting asked for 12 actors/models in total for the 2 days of casting. What was extraordinary about the posting was the detailed specifications of the actors that they required. Of the 12 roles to be filled, 8 needed to be ‘white’. The full post can be read below (though the casting agent’s name and e-mail address have been blurred): 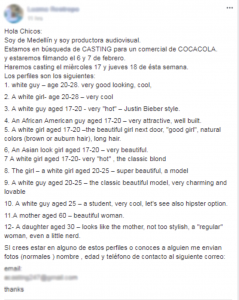 On being asked about the posting, the casting agent told us that she was sorry if she had caused offence but that she was only in charge of the casting, not the concept behind the video (which she could not share with us on grounds of confidentiality). ‘My job is to look for casting for commercials,’ she wrote to us, adding that, ‘I’ve been doing this for 20 years, was there something wrong with what I did? I made an update in case someone felt bad and I removed Coca Cola from the post (I should not have named the brand and I have been told off.)’

The casting agent updated the message (below right) to say that they were now looking for ‘cool and good-looking people’ of which they now needed white people, black guys, Asian women and a beautiful elderly woman. 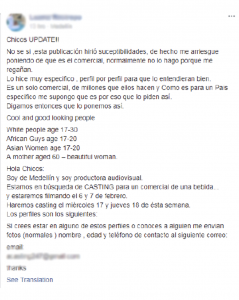 It’s uncertain what say the casting agent had in the characteristics of the models. Nonetheless, the explicit requirement for there to be 8 Caucasian models among 12 roles is one that requires further explanation, even if, for example, the assumption is that this is the right mix of people one would expect of foreigners in Colombia. It would need to be explained why this ratio was necessary for the concept to work. We approached Coca Cola for a comment but they have yet to respond to any of our efforts to reach out to them.

Coca Cola’s most recent ad campaign is called ‘Botella al Desnudo’ and was shot on the beaches of Tayrona, Santa Marta. The ad contains few darker-skinned models and the ethnic diversity within the ad is consistent with the casting agent’s Facebook post. In almost countless ads where these decisions are passed on in confidentiality, this appeared to be an inner look at the way things work in the industry. Which lends itself to the question: how pervasive is ‘whitewashing’ in Colombia within the media?

Despite being racially diverse, Colombia still under-represents many racial types in favour of lighter-skinned models. A perusal of Colombian magazines as well as the many billboards plastered around Colombian cities shows how the portrayal of lighter-skinned models have become the norm. And while any culture has a right to determine their own standards of beauty, it’s curious that these conceptions should come at the expense of different racial groups in a country as racially diverse as Colombia. 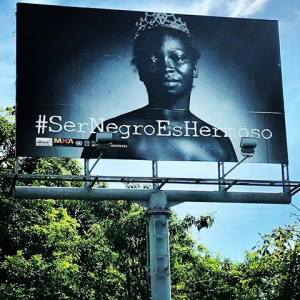 2 years ago, in an attempt to reverse racial ideals within the industry, the Observatorio Distrital Antidiscriminación Racial de Cartagena (ODAR) ran the campaign #SerNegroEsHermoso (Being Black is Beautiful) which aimed to promote the representation of Afro-colombians, who comprise 10% of the entire population, in the media. The campaign recently won an international accolade for its vivid photography. Speaking to El Universal in 2016, ODAR founder Edwin Salcedo said that “purposes of the campaign were to ‘increase the level of self-recognition, increase the level of recognition by the citizens towards the Afro communities and generate a healthy and constructive debate about the diversity and inclusion of these communities in all areas of incidence of the city.’

Diversity in advertising and media is also by no means a uniquely Colombian problem. The problem persists in North America as much as it does in Latin America. In the US and Canada, many companies have taken on full-time diversity recruiters to ensure that portrayals in the media reflect the population at large but yet, others fall far short of what might be considered fair representation.

As for the story of the Coca Cola ad, whether the casting agent’s post is worthy of our revulsion or simply our ridicule will depend on where a person stands on the importance of the media’s portrayal of under-represented faces. Many may feel that larger racial issues, that of displacement or violence perpetrated against Afro-Colombians or the indigenous merits a larger share of the dialogue. On the other hand, it can also be argued that the whitewashing of Colombian media is emblematic of a wider neglect or dismissiveness of darker-skinned people from the public limelight.

Perhaps we might just need to wait for that Coca Cola ad to turn up featuring 8 white folk, a token brother, a woman of Asian descent and an elderly woman with her normal daughter, to give us a sense of how bad the problem is in Colombia.