Higher education funding per student has decreased dramatically in the past decade and the deficit won’t be easy to bridge.

The public university system continues to be in crisis. Every year, the government effectively reduces the annual net investment in public education. According to Semana, after inflation is taken into account, the budget for public higher education has only increased by 2 percent in real terms since 2000, while the total student body has quadrupled.

Public university students started protesting long before the national strike, responding to broken promises from the national government the year before to increase the national education budget (this was in response to two months of striking in 2018). In September and October, protests in Bogotá were met with ESMAD (Colombian riot police) force, leading students to then protest for their right to peaceful protest. Many protested general lack of funding and corruption, although protests centred on the Distrital, where a professor was found to have been defrauding the university.

Lasting in some cases for two months, the protests have had a profound effect on the university calendar, with 12 of the country’s 32 public universities having to postpone the conclusion of the semester. The SUE (State University system) called on these students to promptly return to class in January to finish the previous semester before starting the first semester of 2020 in February.

Meanwhile, at Universidad Pedagógica, students have been calling for student representation in university leadership and boards. These calls turned into several days of striking in October and November before the national strike. The situation escalated when, on November 15, 2019, the university held a roundtable forum between university administrators and students to discuss the student demands. During this meeting, university director Leonardo Martínez was threatened and forced out of the meeting by student protesters outside.

In addition to university students, public school teachers, including those in the national teacher’s union Fecode (Federación Colombiana de Educadores), are also striking. According to Fecode’s website, it is participating in the strike to demand the government’s compliance with the points agreed upon on June 16, 2017. That agreement came after strikes in which they demanded many changes, including the overhaul of what they called “a terrible service and deterioration” of their healthcare system. They also disagree with planned labour and pension reform and are fighting for functional healthcare for all national education workers.

This year, Fecode participated in the January 21 national strike to support greater national issues like the killing of Colombia’s social leaders. They also marched to express their stance against institutional wrong-doing, like the armed conflict’s history of collecting false positives and the state’s illegal actions against journalists and members of the political opposition.

On Thursday and Friday, February 21 and 22, Fecode returned to the streets with an additional 48-hour national strike. The national teacher’s union protested the threats to teachers by armed groups in rural areas. Teachers convened in cities throughout the country, including Medellín, Pereira, Bucaramanga, and Cali. Many may have turned up to demand a thorough investigation of the February 8 attack on former Fecode director, Carlos Rivas, who, fortunately, was not harmed. In Bogotá, groups gathered at el Parque Nacional and marched to the traditional protest spot of la Plaza Bolívar, where they called on President Duque to discuss solutions to the threats rural teachers are facing. Throughout the country, university students joined teachers on the streets in an expression of solidarity.

Where are we now and what changes might we see this year?

The major, consistent source of unrest continues to be the underfunding of public education, as 2018 and 2019’s protests show. Meanwhile, public university leadership is struggling to regain credibility. The student protests that took place within the framework of the national strike were to protest the same issues at stake during the university strikes that preceded November 21, in addition to greater national issues. After the Christmas break, public universities around the country are attempting to keep discontent at bay while picking up the pieces around their shattered semesters. Unrest is bound to continue. 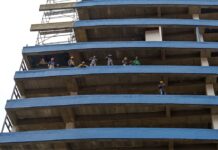 State of the nation: Hard labour