Charlotte Ryan discovers that getting to Cabo de la Vela, one of Colombia’s most tucked-away tourist locations, is not as easy as it seems

“Shit!” I jolted awake to the sight of my friend running around our tiny hostel as if it’s on fire. As she threw things into bags and zipped from one end of the room to the other, it dawned on me. I sat bolt upright. We were supposed to be catching a bus to Cabo de la Vela at 5am. It was now — I looked at the time on my phone — 10am.

We were in Palomino, on the Caribbean coast of Colombia, en route, hopefully!, to fishing town Cabo de la Vela and nearby Punto de Gallinas. A friend had given us strict instructions: we had to get up at 5, catch a bus to a place called Cuatro Vías, where we would take a car to Uribia to meet the transport for Cabo de la Vela. The last car left at 12. It looked like we’d fallen at the first hurdle.

I’m all too suited for Colombian life, so realising our predicament, I was about to roll over and go back to sleep. We can do it tomorrow, I thought. But my friend is made of stronger stuff, so I was promptly dragged out of bed and ordered to direct myself to the bus stop.

As we got on the bus we had the horrible realisation that apparently in Colombia children are allowed to drive buses. Dwarfed in his giant seat, his little legs dangling off the ground, head just barely poking over the steering wheel, the driver could not have been more than fifteen. And, what do you know, Man-Child liked foreign girls. As did his friend Pregnancy Belly (he was a man.)

As we took the only available seats at the front of the bus, and deflected the first of many questions about our relationship status (most definitely unavailable) and level of interest in our charming driver (none), we realised it was going to be a long journey.

The driver seemed to know absolutely everyone along our route, presumably through his parents. It felt like we would never get there. We had by this point read the section in the guidebook confirming that the last bus did indeed leave at 12pm.

Despite the best efforts of our nursery school driver, we finally made it to the crossroads, and after a short, awkward car journey squished in the back of a rusty old Volvo with a Colombian woman and her son, we arrived.

Just kidding! After the car, we then had to take a truck over the bumpiest desert road ever. At one point it broke down. I was by this point ready to give in to my impending death. But we got the truck started again and, as it almost always is, the journey from hell was worth it when we got there.

Cabo de la Vela is a small fishing village nestled on the tip of the La Guajira peninsula. Beautiful, isolated and with an almost eerie aura of calm, it’s what I imagine desert islands to be like. You can sleep in hammocks on the beach, if you’re willing to be eaten alive by mosquitoes, or settle in one of the many hostels along the one street. All seemed pretty similar, so I’d just go for the cheapest bang for your bunk (or hammock.)

If you’re an action junkie, this probably isn’t the place for you: there isn’t much to do. It’s more of a place for lying on the beach, having epiphanies about the meaning of life, talking to the locals to understand their way of life- generally being smug and congratulating yourself on not settling down in that 9-5 back in the UK, basically.

But OK, I have to admit: we only stayed for one day. Much as I loved the place, I really think it may be somewhere to go either on your own, or in a couple. With a friend, it’s a little weird, like you’ve accidentally signed up to a romantic couples holiday with someone you barely know.

Regardless of your relationship status, it’s worth heading to Cabo de la Vela as a gateway to Punto Gallinas. This place most definitely does suit action junkies: you can do windsurfing there, and we met one guy, ‘Call me Solo’ (don’t even ask!), who was a professional windsurfer.

It’s also just an amazing place to be. The furthest north point in South America, you really do feel like you’re at the end of the road. There are cacti and desert as far as the eye can see, all compounded by a beautiful view of crystal blue waters and blue skies.

Aside from windsurfing, you can also take a jeep to the sand dunes and roll down the sand into the sea. That’s not obligatory, just a lot of fun. You sleep in hammocks, or chinchorros (translation: big hammocks) and you will not be able to get over the number of stars you can see at night.

And while they say that life is more about the journey than the arrival, in this case I can assure you that the destination was a lot more pleasurable than the trip itself. 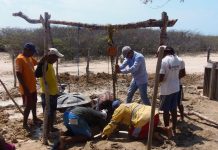 Desalination: well worth its salt