Having just been told that Fernando Vallejo would sign books after the conference, I ran like crazy through the thronged corridors of Corferias to buy ¡Llegaron!, his latest work. I hurried back to my chair, annoyed with myself for having left my copy of his book sitting on a shelf at home, and was relieved to find a kind stranger had kindly saved my seat.

It turned out I didn’t need to run so fast, as the Colombian writer, who moved to Mexico four decades ago, was 40 minutes late. But the wait did not dim the enthusiasm of the crowd who greeted him with a loud and lengthy applause.

Without hanging around, he launched into a discourse which questioned religion, the existence of God, politics, governments and all the evils of humanity.

Vallejo talked about Colombia’s hopeless causes, human beings and their tragic position in the world. He argued that “mankind is lost, we have no redemption, we are going towards death, back to nothing”, adding that we are lacking something essential – morals. He argued that we are destined to failure if we chose religious morals over humanitarian ones.

Never one to hold back, the Medellín-born novelist and essayist also criticised the rapid increase in population on the planet and the subsequent accelerated levels of consumption of vital resources.

He told the packed out auditorium: “I was wrong when I told you not to have children if you do not have the means to raise them. No. Do not have children. Nobody has the right to impose the burden of life and the burden of death on someone that does not even exist yet.”

Taking a break from the macro level, Vallejo condemned Colombian terrorists and politicians alike. He called them ‘corrupt’, ‘vermin’ and ‘murderers’, and highlighted the economic, social and moral damage they have brought to the country. His rant touches on the war that has been ongoing for countless years, the rivalries that prevent the country from progressing, and the peace that Colombians anxiously await, which, he claims, will not be absolute.

“In Colombia new evils come to join those that already exist, a new layer of grime that is added on top of the old […] Colombia is shipwrecked,” he explains, bemoaning monstrous unemployment, forced migration, insane taxes, barbaric kidnappings, common crime and other iniquities that still have to be faced.

His speech, A Colombia, was a stunningly well-articulated discourse, a torn radiograph of the coarse reality of the country and the world in which we live. To listen to Vallejo is to re-open your eyes and, in a way, to remove the blindfold that covers them. His subjects are real. They are current. He addresses those matters that all Colombians – and people living in Colombia – are aware of, but often decide to overlook. We belong to this country that forgets everything – or chooses not to remember – just to avoid the excruciating pain of memory. We ache when we are told our truths because, somehow, we have been indirectly responsible for the disasters, for choosing liars and corrupt leaders.

Sadly, perhaps, there is no sarcasm in Fernando Vallejo’s speech. Direct, frank and harsh, he captures the attention of the audience. As he thinks, he writes. As he writes, he speaks.

Admired by some and condemned by others, Vallejo did not bask in the limelight. He left the stage the same way he entered it. He did not waste time with meet and greets. He did not say goodbye. Another standing ovation, which lasted another eternity, came with his final sentence: “Colombians steal, extort, kidnap, kill, destroy electrical towers, plant mines, blow up pipelines, smuggle cocaine – because impunity is the queen of Colombia. It has been established in our Transitional Justice, the inheritance left by the big rascal.”

Keen to get my newly bought book signed, I jumped hastily from my place and went in search of the area where he was scheduled to appear. There was nothing and no one. I turned and was surprised to meet him head on. We almost collided, but neither he nor the people who were guarding him, noticed my presence. I followed the group, sticking to a couple of journalists behind him. We climbed some stairs and entered a white room with some cameramen and photographers, followed by another even whiter room with more cameras. Fernando Vallejo sat on a small wooden bench. A reporter with short hair was adjusting a microphone on the lapel of his beige jacket. Vallejo interrogated the reporter about the questions that she would ask him.

“What is the relevance of these events for Colombia?” She began.

“I will not answer those memorised and cliché questions,” Vallejo responded with a gesture of disgust, as he stripped away the wires hanging from his coat.

We all were perplexed. Especially the journalist who did not know what to say and quietly collected all her equipment. The group left the white room and headed for the elevator. The reporter with short hair was gone.

Silently we descended to the first floor. We entered the improvised area. People started coming in with their books in hand. They were not allowed to stay long and photos were limited. Fernando Vallejo’s collaborators received the books from his fans, turned two or three pages, decided the place for the signature and handed copies to the author for him to leave his indelible mark.

I stood beside the desk and remained there as if I wanted something extraordinary to happen. I waited about an hour for the vast row to dissipate. I asked once, twice, three times if it was possible for him to answer some of my questions after the book signing. The refusal was blunt on all three occasions. My book was the last one to be signed. He wrote his name in blue ink and, without looking up, returned the copy of 171 pages to one of his guardians. He never looked at me. He never looked at anyone. 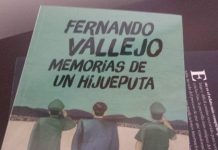 Colombian Institute for the Blind: Braille-mate