With ARTBO set to take place in Bogota for the tenth time, Barbara Buchanan takes a look at Colombia’s burgeoning art scene.

An explosion of new talent in Bogota is putting Colombia’s art scene on the map internationally in a way which would have seemed unimaginable a few decades ago. The number of galleries in the city has increased fivefold over the last 10 years, with the Andean capital proving to be a magnet for artists from across the globe.

The success of its convention, ARTBO, is testament to the city’s growing importance on the international scene. Artists from 21 countries including Brazil, Germany, Mexico, the Netherlands, Spain, Switzerland, the US and, of course, Colombia, will be exhibiting at the event, running from October 24 to 27. This year marks the 10th anniversary with an unprecedented 150 galleries applying to take part, according to exhibition director María Paz Gaviria.

Conceptual artist and ARTBO exhibitor David Peña Lopera, 32, says Colombia was always full of artists, but they “worked in a very closed system” for decades.

He gives the city’s newfound fame a cautious welcome. He describes his home country as extremely conservative, ruled by family and religious tradition. “The explosion of visual arts in Bogota doesn’t mean Colombia is becoming more liberal, it’s an expression of economic power. I am glad it’s happening but I am suspicious of why it’s happening.”

Lopera works from a modest studio near Universidad Nacional where he studied fine art for four years before teaching at the university. After several years teaching and exhibiting as a new media artist, he felt it was time to break free from expectations. Consequently, he decided to do a masters at San Francisco Art Institute in 2009.

“I arrived with only a small bag of clothing and I was given an empty studio with four nails in the floor and I had to start all over again. I was studying with people who came from different artistic, educational and cultural backgrounds. It was a healthy way to compare my ideas and vision of art with new people,” Lopera said.

He noted that the defining quality of his art is its humour. His Cathedral installation, exhibited this year at LA Galeria in a show called Meñique, is a take on a drum set arrangement with pieces of suspended glass. 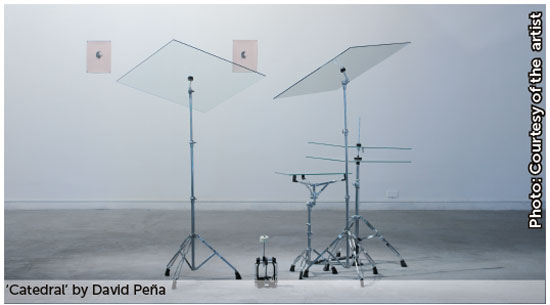 “It’s about light and the energy not really happening in a cathedral and a drum set which you can’t play. There’s absurdity and tension in the piece. It’s also about the tension between Christianity and rock,” he said.

Another tongue-in-cheek work is his suspended BMX bike with a hidden ruby in the tyre.
“It’s technically complex. We have a ruby moving like a planet but we can’t see it and the work invested into suspending the bike and making the wheel move with an invisible mechanism,” Lopera explained.

He said he chose a bike popular with kids rather than a professional one because he’s more interested in working with ‘mongrel’ material.

Astronomy also fascinates him because it’s about understanding the universe and combines science with imagination.

“We are small bodies in a huge universe that we cannot comprehend. Every piece in that show [Meñique] was about understanding things in another smaller body scale,” he noted.

Sarah Houghton, 46, is another artist based in Bogota who is gaining acclaim further afield. She exhibited in the Fundacion Bruno Alonso, Santander, Cantabria in Spain earlier this year and is in negotiations to do a show in New York and Mexico.

Her most recent collection, Huellas de Transeúnte, was about the connection between past, present and future. The show was a reflection on the transience of everything and the way people are connected to their environment and leave a mark on a place even if they are only passing by.

Houghton’s pictures and sculptures are of travellers, often in silhouette form, standing near boats and planes connected to each other with threads. Her work seems to resonate with Colombia’s history of mass population displacements, although she says this isn’t intentional.

“The relationship between my work and Colombia’s social and political context is not overt in the creative process. However, I am a Colombian artist and obviously my work deals with political and historical issues from my country,” she said.

Houghton is currently working on a collection, ‘Mas allá de la piel’ which includes a series of life-size photographic self-portraits of her wearing different coloured wigs.

In a message which will not only resonate with Colombian art lovers, she explains the meaning behind the pieces, saying “The colour of your skin is to do with your family circumstances, but of course there is more to us than this. It’s not important whether we have fair skin or we are darker, in the end we are the same.”