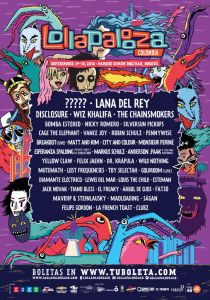 Some of the mystery of the Lollapalooza lineup was revealed on Wednesday, with confirmation that Lana del Rey, Disclosure, Wiz Khalifa and The Chainsmokers will be headlining the festival. But the organisers are yet to announce at least one big name act – as the five oversized question marks adorning the latest festival poster indicate.

The event – which will take place for the first time in Colombia on September 17-18 at the Parque Simón Bolívar – will also feature a whole host of other groups including Silversun Pickups, Cage The Elephant, Matt & Kim, Vance Joy, Lewis del Mar, Wild Nothing, Pennywise, Bomba Estéreo, Yellow Claw, Nicky Romero, Robin Schulz, Goldroom and more.

Unusually for Colombia, there will also be a special area for children. Kidzapalooza will include a stage for live music, workshops and a number of kid-friendly activities. Those under the age of ten enter free with a ticket-holding adult.

When Lollapalooza’s Colombian edition was first announced in September, Philippe Sigenthaler – talent buyer at Absent Papa, one of the festival’s two promoters – promised a “magic and paradiscal setting”. He said the organisers wanted to “dress up and present” the Simón Bolívar Park in a “completely different style from anything previously seen there”.