The Right Stuff sat on the coffee table at my friend’s house. It looked important but far too advanced for me, aged eight. I opened the back flap. The author’s photo triggered a feeling of nostalgia I couldn’t place, as if he were a distant relative or a friend of my grandparents. Whether or not I knew this man, elegantly clad in his white suit and with a wry expression on his face, I felt an unshakeable affinity. “Tom Wolfe” was written across the front in quirky block letters. I etched his name into my memory so that whenever our paths crossed again, I’d know it.

The summer before I left to attend Washington and Lee University, someone told me that it was the same school Tom Wolfe had gone to. Hearing the name, I thought of the book on the coffee table. I still hadn’t read it. Tom Wolfe hadn’t shown up on any high school reading lists, and I never made the time to seek out his work otherwise.

During my second year of college, a friend mentioned that I was living in the room Tom Wolfe lived in. Amused as I was by this revelation, I still only knew about the man peripherally: a famous writer in New York, some of his books were made into movies… From time to time, he would come to campus for a guest lecture series he sponsored. A lot of times, I didn’t know about the lectures until afterwards. I made it to a couple of them only to find out that Tom Wolfe had left right before I got there.

Two years out of college, I finally had the chance to read one of Tom Wolfe’s books — in Spain of all places. A Man in Full was on the shelf at my friend’s house, and I borrowed it with no promise of giving it back. (If you’re reading this, Debbie — I’ll give it back, I promise.)

I was captivated by the exuberant energy of Wolfe’s language, the realness of his (male) characters whose voices I could hear vividly as I read, as well as the book’s blissful moments of enlightenment. As Norman Mailer put it, “Only an innocent or a simpleton could fail to recognize that a live hornet was being deposited in the crevice of every literary seat in town.” Not without its flaws, A Man in Full validated the affinity I felt with this writer as a curious young child, before I had even opened one of his books.

When I moved back to the U.S. from Spain, I reached out to a cousin in New York who I thought could help me figure out what to do with my life. We got lunch and discussed some career paths: diplomacy, consulting, politics, law. Eventually, I cut the bullshit:

“I want to be a writer,” I declared. I mentioned that I was working on a book and, for no reason in particular, that I had lived in the same room as Tom Wolfe at Washington and Lee.

“Oh! Tom Wolfe!” My cousin Joel said falling backwards in his chair as he snapped his fingers. “I met him at a party just a couple of weeks ago. He was in his white suit and everything. I can get you in touch with him. You should write him a letter.”

“And say what exactly?”

“I don’t know… Tell him about the room thing. Maybe he has ideas on how to be a writer.”

A week later, Joel sent me Tom Wolfe’s home address. I got to work on the letter. After about 60 or 70 drafts, I had something that seemed acceptable. I signed my name and left my phone number, for the hell of it. I folded the one-page letter into thirds, put it in an envelope, and dropped it in the mailbox with the address Joel gave me written on the front. I waited nervously: for a phone call, a letter, or maybe an apparition. And then I forgot about it all completely.

Months later, an envelope with my name on it came in the mail. “Wolfe” was typed out in the return address in the upper lefthand corner. I opened the envelope and this is what I found: 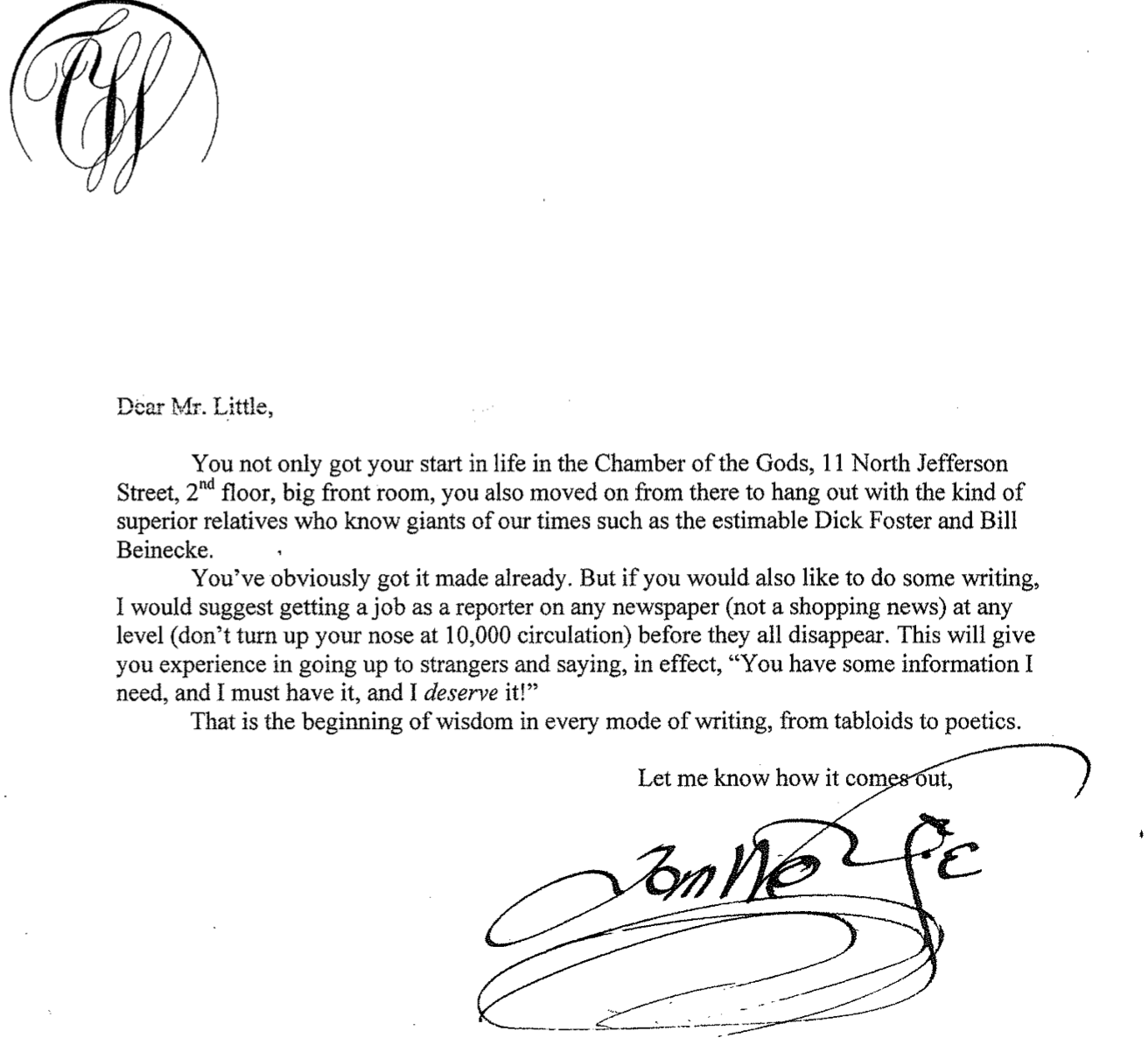 I felt the  same nostalgic affinity I felt when I was an eight-year-old. But this time, it made sense. Tom Wolfe, the celebrated writer and American icon, had taken the time to read something I wrote. And then he wrote back to me.

Months later, I wrote another letter to him asking for his thoughts on the most recent stir about our university, as Robert E. Lee’s legacy there is a complicated one. (I, personally, would not be opposed to seeing the university change its name. Sometimes a name change is the right thing to do.) It’s hard to have any opinion on it without deeply offending someone… not that Tom Wolfe was ever too careful about not offending the establishment…

But this time, Tom Wolfe didn’t write back.

In most cases, it’s unfair to claim personal tragedy when artists die, since most of us only ever know them as immortals. We read or listen or watch their work at our own pace, whether it was made in 1960 or 2016, whether the artist is dead or alive. I can count on one hand the famous artists whose deaths I’ve ever deeply felt: Gabriel García Márquez, Robin Williams, David Bowie, Prince… and that’s it. For me, the tragedy of these deaths lies in being deprived of the chance to make a personal, earthly connection with them: a wave, a conversation in passing, or maybe a piece of advice, written in a letter.

To say that I wish I had met Tom Wolfe in person or that he had sent a second (or third) letter back to me belies my gratitude that he validated the kinship I sensed before I read any of his books or knew the slightest thing about New Journalism, the literary movement he founded.

Rest in peace, Tom Wolfe. You were already immortal.