Nicolás Montero, the artistic director for the Teatro Nacional, shares his views on the role of theatre on society and the way that plays can cast our lives in a new light.

“What did you bring?” Nicolás Montero asks me sharply. I sit down as he concludes a meeting he had been holding in his office. Seeing my disconcerted face he clarifies that the least I could do is compensate him with a cookie for being late. I laugh, but with gravity on his face he assures me it was no joke.

“Let’s get started,” he says, remaining standing. I suggest sitting down on the couch to talk and he responds that he is fine where he is. I start to fear the interview will go very badly. However, his answer to my first question began with a loud laugh. “Very entertaining!” he says, referring to the first few months he has served as director of the Teatro Nacional.

Since February, renowned Colombian actor Nicolás Montero has been the head of one of the country’s most important cultural institutions. The aim is to revive the Teatro Nacional, producing influential content that will enrich the lives of spectators.

Such is his conviction, knowledge and gravitas that I feel I am in the presence of a true maestro. He combines academic knowledge with years of acting experience and, immersed in his words, I begin to understand the powerful potential of theatre, which stretches far beyond entertainment.

He describes his previous relationship with the Teatro Nacional as a loving one. With a smile, he remembers that Fanny Mikey invited him to be part of the institution’s first artistic committee. In addition, he has performed there on several occasions as an actor and also directed plays like Closer and Cita a Ciegas.

One of the country’s best known actors, the position of artistic director is somewhat of a new role for Nicolás Montero. He says he tries to make the work enjoyable for everyone, promoting teamwork and trying to foster a sense of pride within the company. “All these cultural enterprises have an intangible added value. It is as if we invite the viewers to a party where there will be a significant experience. My premise is to position the Teatro Nacional as the place where we can get a glimpse of what we are.”

For Montero this is where the real role of theatre begins: to explore the human condition. “The stage is a site designed to make everything possible. Theatre is about life but is not life itself,” he says. It is a place where we can jump in time and explore an unimaginable number of characters, and in doing so, we are confronted with our true natures.

In a world where everything is virtual, real encounters are becoming increasingly necessary.

The 51-year-old is determined to get the right balance between aesthetics and entertainment, always with the audience in mind. “It is like good conversations, where we propose, listen and we all learn together. Good conversations are always a building process. I always have Jaume Vallcorba’s phrase in the back of my mind, he said ‘My job as an editor is to propose content to people that they do not yet know that they will like, but that they will like anyway.’”

That is why this year’s programme has a wide range of shows. In Frida, which opened in July at the Teatro Nacional La Castellana, Flora Martínez’s performance gives the viewer a glimpse into the world of the extraordinary painter Frida Kahlo. Tratado de Culinaria para Mujeres Tristes is an adaptation of Héctor Abad Faciolince’s book, which will be accompanied by an initiative called ‘Tardes de Teatro y Libro’, where the author will be on hand to talk directly with the audience. Then there’s comedy in the form of Conversaciones con mamá, and Los Cinco Entierros de Pessoa, about the life of one of the most important authors of the twentieth century. And that’s just a few of the performances.

While there is a lot of young talent in the country, Nicolás Montero thinks that Colombian theatre is held back by a reluctance to take risks. “Mature societies protect institutions. They identify the need to create an institution that allows us to protect creation processes. Theatre is one of those things that requires strong institutions that fulfil various functions, including taking risks on behalf of individuals. This is where Colombian theatre has a long way to go,” he says.

In an increasingly digital society, theatre faces some interesting challenges all over the world. But Montero is clear that the artform has survived for over 2,500 years and it’s not going away now. “Theatre is like a party. You can not go to a party by streaming. The theatre is the present, it faces you here and now. It is not editable and that is its great strength. In a world where everything is virtual, real encounters are becoming increasingly necessary.” 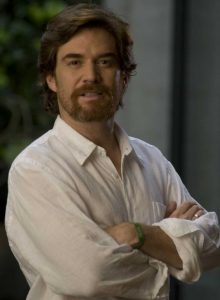 Nicolás Montero has clearly thought a lot about the role of theatre in society. Even so, he ponders his answers carefully as he explains to me that theatre is not only about exploring the human condition, it’s a way of relating to reality. He asserts that those creative forces that he speaks of have to do with the creator that each of us carries inside.  “We are creators!” he exclaims. “A product is actually the result of a process, in which I am also the result. The processes in art make me relate to each step of creation, that is why in the end the reality that I produce is part of myself. What I do is testimony of who I am,” he concludes with a smile.

Anthropology is important for Montero, who believes that the line between it and acting is very thin. He pauses and whispers, “I could never separate them. Acting is an anthropological experience.” It is at that point that I understand the certainty with which he expresses himself and the sharpness of his sentences.

He explains that an anthropologist approaches an unfamiliar culture in the same way that an actor looks at the psychology of a new character. “A reflex relationship is created. When you look at the other you see yourself. That is what both an actor and an anthropologist do. Both disciplines are very similar and reach similar conclusions: there is no truth.”

“My trained eye as an academic allows me to understand that anthropology is also a theatrical exercise, and that the typical tools that one assumes as an actor allow us to comprehend that what anthropology is looking for can also be verified from the artistic and interpretative exercise. There are complementary tools that come from the art world that are critical for interpreting reality. Is that not what anthropology wants? To have an interpretation of reality as rich as possible? How to bring those two worlds together is one of the challenges that I think we have.”

The conversation has been peppered with introspections and laughter, but now it’s coming to an end and I ask him one final question about his participation in the adaptation of Shakespeare In Love. Nicolás Montero plays the role of Shakespeare himself and he tells me that he is thrilled, as the public seems to enjoy it and the shows are full to bursting. As I thank him for the interview, he throws a final sentence with serenity: “You owe me a cookie. Do not think I have forgiven you. Do not think I have forgotten.”

I am still indebted to him.