It’s that time of year again when we get to marvel at flourescent costumes, eccentric floats and be part of one of the most fun celebrations in the city. Yes, Gay Pride Bogota is coming soon.

LGBT related events take place in Colombia and all over the world in the month of July. And it’s not all just about zany costumes and glitter.

Miguel Barriga, Director of Corporacion Red Somos, an NGO based in the Candelaria that works specifically on the promotion and education of LGBT rights says, “It’s not just a celebration for the gay and LGBT community, but a carnival for everyone to enjoy and a day where the public can show their support and concerns for the LGBT community.”

The parade is organised annually by various groups within the LGBT community and is also supported by the Government.

Barriga told The Bogota Post that each year the groups come up with a political aspect to work around for the parade. This year the theme is Peace Culture, in relation to the ongoing peace process between the government and FARC guerrillas.

“Each year it is getting bigger and more popular. We had between 30 and 35,000 participants last year. A lot of people come along to watch the show and to see the colourful floats and costumes,” Barriga said.

However, the NGO director added that during the run-up to the parade there tends to be some anger towards the LGBT community from other sectors of society. `

These are mainly in the form of threats from the Colombian neo-Nazi group ‘Tercera Fuerza’ and protests by traditionalist Christian groups.

But on Parade day there is usually no trouble, so get your rainbow flag out and at the ready.

The official march will take place at 1pm on June 29 setting off from Parque Nacional (calle 36 #7), right up to Plaza Bolivar in the city centre.

Look out full coverage from the parade and more on the LGBT community in Bogota in our next edition. 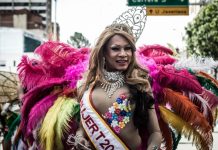