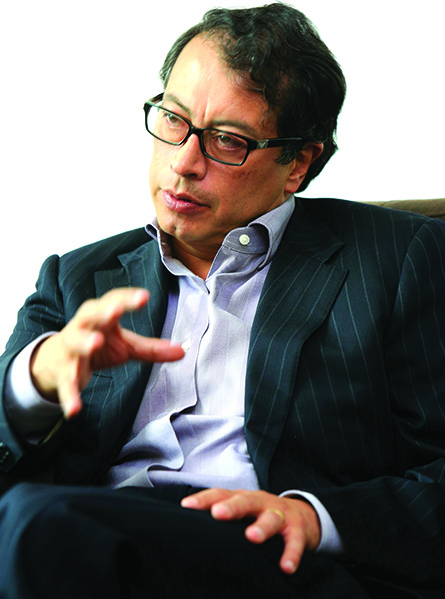 Bogotano voters are the real losers as Colombian President Juan Manuel Santos announced last week that he  was approving the impeachment of Bogotá Mayor Gustavo Petro.

In many quarters an almost audible sigh of relief could be heard in the knowledge that the months of political bickering, litigation and junkets to Washington to plead before the Inter-American Court were finally over.

Opponents of the now-deposed leftist Bogotá mayor may have smiled, but there was little in the way of celebration. And despite fresh calls to rise up and protest, supporters largely stayed at home.

The few hundred who did show up in Plaza Bolivar to hear Petro’s fiery condemnation didn’t hang around long afterwards.

Petro may have been hyperbolic when he said his dismissal “dealt a mortal blow” to democracy, but given Colombia’s poor track record for free and fair elections, he has got a pretty good case to make.

Just two weeks ago Colombians went to the polls in the nation’s Congressional elections. The polls saw little more than 50 percent voter turnout, and soon after were marked by allegations of vote-buying and widespread fraud – so much so that at least three of the political parties that fielded candidates in the election demanded a recount.

Those allegations, probably more true than not, are typical in Colombia. It’s little wonder, then that most Colombians hold their elected officials in such low regard, and that so few believe elections won’t be mired by moneyed influence or violent intimidation.

Few, of course, with the exception of the Bogotá mayoral election in 2011, which saw the leftist former M-19 guerrilla member Gustavo Petro rise to power. By Colombian standards, Petro’s election victory might have been the fairest and most transparent election in the country’s history. So despite what one thinks about Petro or his politics, it’s easy to believe that Colombian democracy has been dealt another serious blow with the takedown of Petro, ultimately, by the decision of one unelected bureaucrat.

The bureaucrat in question is Colombia’s Inspector General Alejandro Ordoñez. Other countries have something akin to an inspector general, but Colombia is singular in that it entrusts so much power to one person. Ordoñez is in charge of a massive bureaucracy designed specifically to investigate and punish public officials for illegal conduct, and can effectively sentence officials to political death. What’s more, he answers only to the president of Colombia.

The inspector general has sanctioned and fined hundreds of mayors, municipal officials and departmental governors since he took charge of the office in 2008. Some high profile political figures to face Ordoñez’s axe include the leftist ex-senator Piedad Cordoba and former Bogotá mayor Samuel Moreno.

Some view Ordoñez as a white knight of sorts, a crusader against the corrupt in a country crawling with shifty and shady politicians who are concerned only with using their positions to enrich themselves. But detractors charge that Ordoñez – a religious conservative who is an outspoken critic to the leftist FARC guerrillas and fiercely opposed to gay marriage and abortion – has used his powers to attack his political rivals on the left, with Petro falling squarely into that category.

Petro says Ordoñez has singled him out since he was elected mayor for his past membership in the now-defunct guerrilla movement, the M-19, and in October last year Petro went to the Inter-American Court of Human Rights in Washington – just a few weeks before the dismissal ruling – alleging he was the victim of “harassment” and “political persecution” on the part of the inspector general.

Shortly before Christmas and just a couple of weeks after he was sacked by Ordoñez, Petro returned to Washington to again argue before the court that his political and human rights had been violated, and hinted that it was part of a much more nefarious plan. In an op-ed in The New York Times, Petro said his impeachment was a politically-motivated plot to weaken Colombia’s progressive movement, and to derail the peace talks taking place between the government and the FARC guerrillas in Havana, Cuba.

“Those who support the talks with the FARC have said that removing me would demonstrate that former guerrillas could not safely lay down their arms and be assured a role in a fair and democratic government,” he wrote. “In attempting to disqualify me from participation in politics on the flimsiest of pretexts, Mr. Ordoñez is trying to end my political career and weaken the political left. He is also trying to deal a blow to the peace process with the FARC.”

Whatever the reason for Petro’s dismissal -be it for his disastrous trash collection reforms, which left many parts of Bogotá covered in garbage, and from which many parts of the city have yet to recover, or some signal that the left is not welcome in the political arena – the nearly four-month-long political drama did a disservice to Bogotá´s voters, not once but twice.

The first time because the saga was allowed to drag on for so long, while various courts, tribunals and layer after layer of government weighed in on the issue and left the public, journalists and even the most seasoned legal minds scratching their heads as to whom among the competing forces in the chaotic power struggle had the final say on Petro’s impeachment.

And a second time when Bogotanos were promised it would be they who would decide Petro’s political fate in a recall referendum – a promise denied to them by President Santos’ ruling last week (March 20). With Petro ousted, the referendum, scheduled for April 6, will now be scrapped, and Bogota’s citizens will have to wait for the chance to choose who will govern their city.

Bogotanos will have to wait two months longer at least, as a mayoral election must be called within 60 days, pushing the election date well into May, perhaps just days before the presidential election on May 25th when campaigning will be in full swing. Presidential campaigning is likely to drown out the messages of Bogotá mayoral hopefuls when they need to be heard most.
Only the candidate of either election who yells the loudest will be heard over all the noise, noise that could wear on the nerves of Colombians in general and Bogotanos in particular and put the whole lot off going to the polls altogether.
And if Petro can be thrown out of office for his mishandling of the city’s trash collection, should someone else be thrown out of office for the mishandling of his impeachment proceedings and the electoral chaos that is sure to ensue?

Dec 9 – Inspector General announces Petro’s dismissal from office, as well as ban on him holding public office for 15 years for mismanagement of the city’s trash collection reforms in 2012.

Dec 10 – Petro announces he will appeal the Inspector General’s ruling.

Dec 9-11 – Thousands of protesters rally in Bogota’s Plaza Bolivar in support of Petro.

Dec 11 – US Ambassador-designate to Colombia questions abrupt removal of the Bogota mayor; Colombia’s Foreign Minister tells US “not to opine on Colombia’s internal affairs.”

Dec 17 – President Santos holds private meeting with Petro, says afterwards he is “not going to take sides” on the matter.

Dec 18 – Colombia’s electoral regulator, the National Registry, announces a recall referendum will be held against Petro after a citizens group collects 300,000 valid signatures, despite Petro’s removal from office.

Dec 18 – Petro flies to Washington, DC, to make his case before the Inter-American Court of Human Rights, arguing that his dismissal was a violation of his human rights.

Jan. 13 – Ordoñez “ratifies” decision to impeach Petro, even though President Santos has the final say.

Jan. 14 – A regional court in Cundinamarca rules that the impeachment violated the Bogota mayor’s human rights; Petro’s impeachment is put on hold.

Jan. 20 – Recall referendum against Petro is set for March 2nd

Jan. 24 – The State Council, an independent institution tied to Colombia’s judiciary, says it will weigh in on the validity of 36 lawsuits before the Cundinamarca regional court.

Feb. 10 – Ordoñez flies to Washington, DC, to argue in favor of Petro’s impeachment before the Inter-American Court of Human Rights.

Mar 20 – Petro’s lawyers announce plan to file lawsuit against President Santos for rejecting the request made by the Inter-American Court of Human Rights to suspend the impeachment.