Our columnist Adriaan Alsema points out that we are all freaks in our own way, and questions the need for plastic surgery to make ourselves more freakish

Women who receive plastic surgery are freaks to me. I don’t mean to pass judgement, but it’s how I perceive them and their exceptional attributes.

I have made several friends in Colombia who’ve had plastic surgery to add bits to or remove bits from their bodies surgically for aesthetic reasons. I never understood why because I end up staring at their nose or breasts or ass as if they were freak attributes, which – let’s just be honest here – they are. I am not judging, I am just saying.

I’ll give you an example: one of my friends has a nose. I never really noticed she even had a nose until after she had it operated on and the thing looked like a miniature slide from an amusement park.

“What’s wrong with your face?” was the first thing I asked, noticing something wasn’t quite right. “I had my nose operated on,” she explained.

“Oh,” I responded, confused, not understanding why anyone would operate on a perfectly fine nose. “Couldn’t you have picked a different nose?” I asked, adding without thinking, “This one looks kind of weird, you look like part of an amusement park.”

My friend obviously told me to go fuck myself.

The thing is that I don’t see a difference between “The Bearded Woman,” “The Woman With Three Breasts” or “The Woman With a Slide For a Nose.” To me, women with suspiciously curvy noses, or particularly noticeable breast or ass implants are freaks. To me, these attributes are exactly like excessive body hair or a third tit.

I consider myself a freak because I have horrible teeth and bad skin. My dad is a freak because he has one leg shorter than the other [but] I couldn’t care less, neither could my dad.

Again, I am not judging, I am just saying how I perceive it. In fact, I consider myself a freak because I have horrible teeth and bad skin. My dad is a freak because he has one leg shorter than the other.

My first-ever girlfriend had her breasts operated on, but because she had abnormally large ones, so she had them reduced to everybody else’s size. It made perfect sense to me. We all want to be normal when we’re young – nobody wants to be a freak at 18.

This is when things get ironic. I think my friend with the nose was actually under the impression her real nose was a freak attribute that needed to be standardized. She perceived her operation the same way my ex-girlfriend did hers. Both just wanted to be normal.

The only thing is that my ex actually did have extraordinarily large breasts and my friend’s nose really was in fact normal. It was so normal I never even noticed it was there. I can’t help but think of this as sad. My friend had apparently been unhappy with her perfectly fine nose for a long time. Something erroneously convinced her that her normal nose wasn’t normal and required an adjustment.

Even though I can’t look at her face without staring at her nose, I hope she’s happy with the result of the operation and feels normal now. I hope the girls who get plastic surgery with plastic asses and boobs are also happy. I hope they don’t mind me thinking of them as freaks. Coming from a self-proclaimed freak with bad skin and teeth, it shouldn’t be too much of an issue.

Adriaan Alsema is the founder and editor-in-chief of Colombia Reports, South America’s largest news website in English. Born and raised a Dutchman, Alsema has been living in Colombia since 2008. 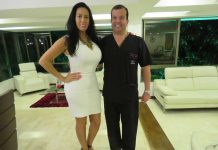 ‘We Want To Be Champions’