Home Latest Post conflict 2 years on: Reconciliation: ‘Not easy, but not impossible’

Kintsugi, an ancient Japanese technique that repairs broken pottery – sometimes with beautiful golden seams – has provided a powerful form of post-conflict reconciliation. In kintsugi, which is dubbed ‘the art of precious scars’, the cracks and repairs are embraced as part of an object’s beauty.

Caquetá was the epicentre of some of the most brutal clashes of the conflict. It is there that kintsugi is helping those affected to connect and forgive – to value, not hide the deep scars that Colombia’s brutal conflict has left on its society.

In this case, the idea is to accept rather than try to erase the deep scars left by landmines.

I travelled to Florencia, the departmental capital of Caquetá to better understand the reality of Colombia’s post-conflict. It lies at what is the last paved road before miles and miles of Amazonian rainforest.

This road leads to San Vicente del Caguán, the unofficial FARC capital and centre of a 42,000 km2 of demilitarised zone in the early 2000s. It is also here that presidential candidate Íngrid Betancourt was abducted in 2002, in addition to a long list of political figures in Caquetá who were abducted and killed during the decades of conflict.

Not surprisingly, the rest of Colombia remembers Caquetá as the ‘homeland of guerrillas’, and it’s often stigmatised for the still-prevalent illicit cultivation of coca plants fuelling the illegal cocaine trade.

When victims of landmines were first asked to meet in an art workshop with ex-combatants of the very guerrilla groups that had laid the mines, it looked like a mission doomed to fail. “I personally find it hard to work with people who left us mutilated,” said one participant who did not want to be named.

Civilian victims and their families, ex-guerrillas, members of the police and armed forces all had their doubts at the start.

But Fundación Prolongar, the group behind the initiative, persevered. “I have always had a lot of confidence in the power of art to create bridges, even where you do not imagine that they can exist,” says María Elisa Pinto, CEO of the foundation.

The foundation organised eight workshops over several months. The three groups – civilians, armed forces/police and people in the process of reintegration – met separately initially to work on their own difficult memories of the conflict. The next stage was to bring the participants together to construct the kintsugi pieces. The art was then put on display in an exhibition called ‘Encuentros que reconcilian’.

“I have always had a lot of confidence in the power of art to create bridges, even where you do not imagine that they can exist.”

It was not an easy process. “Just hearing about the possibility that we were going to meet those groups, I did not want to come back”, said one of the civilian participants.

But talking to participants over lunch before the opening of the art exhibition in Florencia, it becomes clear that the project had brought them together. And that many Colombians are not only fed up with chronic violence, they also have a desire to forgive. And a desire to be forgiven.

“I am apologising, from the bottom of my heart, to all those families to whom I, misguidedly, was once doing harm. For the sons and families that disappeared”, says participant Juan Carlos, a former fighter of an illegal armed group. Now he leads a community NGO that offers sport and recreation activities to young people – with a mission to fight against recruitment of minors by armed groups.

The exhibition might give hope to those who share legitimate fears that the peace deal might be on the brink of collapse. The election of President Iván Duque, who was one of the leaders of the ‘No’ campaign against the peace agreement, combined with reports that demobilised FARC are taking up arms again mean that two years into post conflict, many questions still hang over the process.

However, Florencia feels like a region in transition. The signing of the peace deal has brought dramatically increased security as well a nascent tourism industry. Modern supermarkets, cafés and restaurants have opened over the last ten years, and visitors find a tranquil mid-sized city.

Yet my jugo de piña, a local specialty of Caquetá, is served by a woman who shyly approaches me in a quiet moment to tell me that she is also a ‘PPR’, a ‘person in the process of reintegration’. This dry term stands for de-mobilised ex-FARC members, part of a government program to help them reintegrate in a civilian life.

Is she afraid to come clean about her violent past? “It took a long time before I could tell my boss. There are many stigmas. But no, I am not afraid”, she says slowly. According to statistics given by the national agency for reincorporation (ARN), about 63,000 former members of Colombia’s illegal armed groups have disarmed since 2001, and about 10,000 are currently attending the governmental reintegration programs.

“In Colombia, we only tell the story of the civilians. But we also need a place to commemorate the soldiers that died. Military history here just does not exist. I find that unbelievable.”

Historian Álvaro Melo is speaking on the other side of Florencia, at the barracks of the Sixth Battalion of the Armed Forces, as he points to walls plastered with dates and numbers of military victims. They are trying to build up a memorial archive and, if they can get funding, set up memorial stones for those who died wearing Colombia’s military uniforms along the paved road to San Vicente.

“Just because I am wearing a uniform, it does not make it right if I am wounded or killed,” police captain Jorge Landinez tells me later.

From the outside, it is easy to put victims in one box and perpetrators in another. But when you dig under the surface, even a little, the lines become blurred. Are ex-guerrillas also victims of the conflict? And what about soldiers? Or policemen?

Not only that, but the uniforms can change. In Caquetá, you can find former guerrillas that then deserted, joined the army or returned to a quiet civilian existence – or became mutilated by the same landmines that they themselves had laid out in their previous lives.

The labels of victim, soldier, guerrilla fail to tell the stories of the real people involved. And in the end, initiatives that help people to move beyond the labels are probably the biggest hope of Colombia’s complicated post-conflict.

Back in one of the city’s bustling shopping malls, the group is preparing for the grand opening of their exhibition. I ask Juan Carlos about the story he hopes to tell with the kintsugi art.

“Reconciliation is not simple. But then it is also not impossible. It is a journey, one step at a time,” he says. He and his peers hope to inspire others to follow suit for reconciliation beyond their communities: “Hoy construimos paz.” “Today we build peace.”

What is the government’s current commitment to protecting social leaders in Colombia? 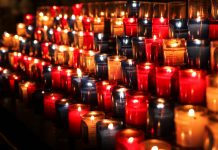