In one word: Education

The mathematician and newspaper columnist entered politics relatively late in life, but is still widely respected for his work as mayor of Medellín and governor of Antioquia.

61-year-old Fajardo has positioned himself as a centrist politician between the extremes of Duque and Petro.

One of the leaders in the opinion polls back in January, he has steadily lost momentum. Pressure from various sides to form an alliance with De la Calle has not borne fruit.

What he stands for:

Fajardo is the man in the middle, who seeks to build a less polarised society. In some ways Fajardo is the candidate of change, but not revolution.

His campaign is focussed on the two main pillars of education and the environment. He sees education as the foundation needed for a new country, and accordingly claims lack of education as a primary factor in continued poverty and deep inequality.

He wants to increase the education budget by 10% per year and double the number of children attending school each day.

He believes that agrarian policy – including crop replacement rather than forced substitution – is key for a long-term peace.

Transparency is another buzzword for this candidate and his running mate Claudia López. Fajardo has been outspoken against vote-buying and proposes to make both the judicial and electoral system more transparent.

He is committed to the peace process and has said he will honour the agreement made with the FARC.

Fajardo has the backing of both parties in his coalition – Alianza Verde and Polo Democratico – which also gives him some powerful allies. Antanas Mockus – the popular and at times unorthodox senator and former mayor of Bogotá has been out on the streets with his vice-presidential candidate, straight-talking senator Claudia López.

In terms of the electorate, he wants to appeal to people who are pro-peace but tired of corruption.

Fajardo may be falling behind in the polls, but he’s still the candidate voters like the most – with a 61% favourable image in the latest Gallup poll.

He is widely praised for the work he did as both mayor of Medellín and governor of Antioquia in making education more accessible and creating more recreation spaces, as well as his work in helping demobilised paramilitaries to reintegrate.

He has been criticised as overly professorial and unable to connect with a public who are more moved by feelings than ideas.

Others say that by trying to take the middle ground, he’s ended up only appealing to a few with an unspecified grey position that is neither black nor white.

Fajardo’s work as the governor of Antioquia has won him both supporters and detractors. Those who oppose him say that he was behind a number of projects – such as the educational parks and the Biblioteca España – which have turned into expensive white elephants because of high running costs.

His claims that he is the fiscally responsible candidate have been met with arguments that during his time as governor of Antioquia, the debt doubled as well as some of the investment decisions taken during that time.

Fajardo sparked uproar when he suggested that the pensionable age would have to be increased. None of the other candidates agreed and he reversed his position.

– By Emma Newbery, Oli Pritchard and Freek Huigen. This article first appeared in edition 54 of The Bogotá Post. 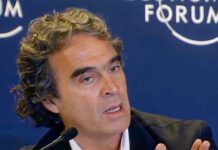