Chicago’s Museum of Contemporary Art will be home to a number of Colombian artist Doris Salcedo’s thought-provoking and distinctive installations until May 24.

The renowned artist is defined by her subtle yet powerful comments on Colombia’s social and political situation, civil conflicts as well as social conditions in cities in the US, including Chicago.

Rather than focusing on the explicit violence and obvious injustices, Salcedo’s work centres on loss. She conveys ideas of absence and grief, using simple and sensitive installations.

The retrospective in Chicago features major works from her prolific 30-year career, including Plegaria Muda (Silent Prayer), which consists of pairs of wooden chairs resting on each other, with layers of thick soil in between them.

The haunting result gives a sense of fragility and emptiness, balanced by a glimmer of hope that comes from the solitary blades of grass poking through the wood.

Perhaps her most famous installation was a two-day display at the Palace of Justice in Bogota in 2002, which commemorated those who died in the 1985 siege. Chairs were lowered from the roof at the time of day that each victim was killed.

Salcedo has displayed her work across the world, including in Italy, London’s Tate Modern in 2007, Turkey and, of course, Colombia, although she has as yet not taken on the US scene on a grand scale.

This could all be set to change, however, as Doris Salcedo’s retrospective is also due to go on display at the Guggenheim Museum in New York in June. 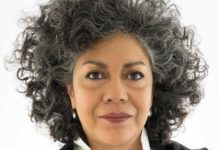