Director William Vega revisits his contemplative style in his second feature Sal, an atmospheric tale of a wounded man stuck in a metaphorical limbo that is beautifully represented by the Tatacoa desert.

If there is one Colombian director who knows how to craft a dismal, soul-sucking atmosphere it’s William Vega. Just as he did with the La cocha lagoon in La sirga (2012), he uses a unique landscape to make a visually stunning film where every shot is perfectly composed.

The story follows Heraldo, a lone traveller who is seriously injured in a motorcycle accident while crossing the desert in search of his missing father. He is rescued by a hermit couple, Salo and Magdalena, who take him in and try to heal his wounds with the salt they mine from the caves.

With the passage of time, the protagonist gets acquainted with his caregivers, they bathe him and feed him cactus and hare. Soon, they realise that Heraldo’s heart is as broken as his body.

The movie delves into philosophical themes like the process of healing, the seeming inability of humans to stay out of each other’s business, as well as the search for approval in a father figure.

It is unclear if the movie is set in Colombia. The desert represents a sort of purgatory that Heraldo must endure before resuming his journey. As Salo explains, surviving is all about becoming part of the ecosystem.

In technical terms, Sal is quite an achievement. The sound mixing and editing are flawless and I cannot emphasize enough how visually stunning this film is. It has a western end-of-the-world feel to it, full of rusty metals and earth tones from the desert.

However, the ambitious premise of the film makes it a hard sell for the wide public. This is an arthouse movie that is unapologetically ethereal and ambiguous. Don’t expect a climactic or satisfying ending, just sit back, enjoy the scenery and make your own interpretation of it. I believe it’s worth the effort. 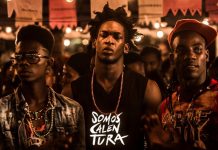