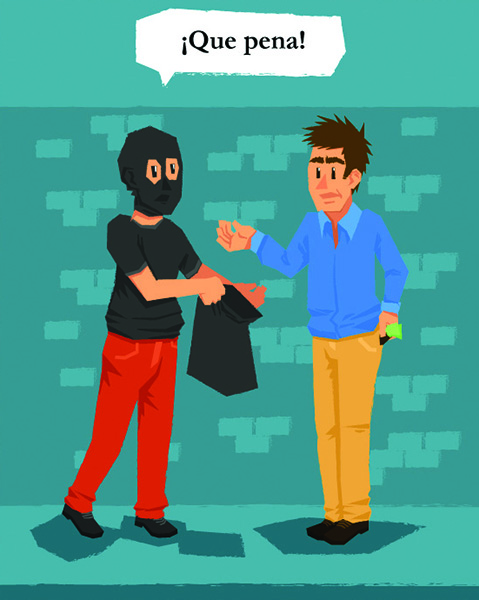 It’s not always best practice to translate sayings/phrases in one language directly into another and then take them literally in your own tongue. There are many examples in English where taking a word-for-word translation of certain expressions just doesn’t make sense in other languages; ‘the hair of the dog’, ‘beat about the bush’ and so forth.

Yet the Colombian Spanish saying of ‘que pena con usted’ doesn’t fall into this bracket – not if you judge it in the way the majority of people use it here. The literal translation is ‘what pain/embarrassment for (with) you’. This tends to be used in many scenarios in Colombia when, in the English speaking world in any case, the more appropriate response would be ‘sorry’ or ‘is there anything I can do to help?’

Now it could be said that ‘que pena’ for Colombians is their ‘sorry’ and that’s what they mean when they utter it. That is to leave aside the fact that there is in existence a perfect Spanish equivalent of ‘sorry’, namely ‘lo siento’, – literally ‘I feel it’ – which many other Spanish speaking countries have no problem using.

However, as is so often the case, actions speak much louder than words. So for example, an all-too-often ‘que pena’ usage is when you’re in the middle of asking for something at a bar or café or the like and somebody else comes along and starts barking out his (or her – and perhaps it’s more likely to be a woman) order ahead of you. You politely inform him that you were there first and in the middle of ordering; cue the ‘que pena’ (without making eye contact) and the ‘out of order’ order continues without a second thought for the ‘displaced’. In other words, to fit the translation: “What a pain for you indeed. But I’m happy, I’ve got what I want, that’s the most important thing.”

You could argue that there is a freshness and even honesty in this compared to much of the English speaking world where people sometimes use ‘sorry’ when they don’t really mean it. It’s fair to say though, in comparison with the example above for one, our behaviour in queues is generally a little more courteous and, dare it be suggested, correct.

Moreover, an indifferent ‘que pena’ is used in so many contexts where ‘lo siento’ should be the more appropriate reply backed up by a genuine acceptance of an error or misjudgement. In its absence, it really only leaves one conclusion; they don’t care that their actions have impeded you.

It does seem like a case of ‘sorry being the hardest word’; or just not in the vernacular full stop.

Alongside this you have another, what appears to be, national trait – well from this writer’s experiences and anecdotal evidence from others at least. That is an inherent inability to admit culpability to anything, even if there is irrefutable damning evidence to the contrary.

In some places around the globe putting your hand up to say you were at fault is seen as a brave, courageous step in many incidences, a display of honesty. Not so, for the most part, in Colombia. There’s always some sort of excuse available, even if it happens to be about as watertight as a teabag.

Yet this doesn’t mean that you can’t be at fault (well somebody has to be, right?). If something unfortunate happens to you, a typical question here is ‘what did you do wrong?’ for it to have occurred. For example, ‘it’s your fault that the ‘ladrones’ (thieves) robbed you, you allowed them to.’ No ‘dar papaya’ and all that. (It must be added here that the few ‘run-ins’ I’ve had with undesirables have generally been down to my own stupidity – it’s not the case for everybody though.) This perhaps gives some explanation as to why there appears to be at times a laissez-faire attitude towards petty crime among the locals. It happens, and if you’re the victim you probably did something to allow it happen.

‘Que pena con usted’ indeed. Continue to throw it this way however, and the bigger ‘pena’ might be with you. I’m too nice for that though. Plus, as has been frustratingly learned over the last few years, it’s best not to take such things too seriously in these parts; nobody else appears to.

Brendan is a ‘journeyman journalist’ currently based in Bogotá. Read more of his thoughts about Colombian life on his Wrong Way Corrigan blogs or follow him on Twitter.

The language of elections