Home News, Analysis & Opinion Rubbish piles up on the streets of Bogotá

Health and environmental disaster declared as, like a ghost from its past, the spectre of uncollected rubbish returns to haunt Bogotá

A sickening, disgusting smell was in the air in Bogotá’s streets on the night of February 6 this year. Thousands of rubbish bags, and all kinds of rubbish, accumulated on pavements, in parks and even in front of houses. Almost one week had passed since the last time the rubbish had been collected and that day it seemed that this important matter would be further delayed. The problem was not only dealing with the stink from the waste, but also the increased amount of rats and flies attracted by the piles of refuse.

Then the chaos began. A group of residents in the Alamos neighbourhood in Engativá, in an outburst of anger, threw rubbish bags on the roads and blocked Calle 63, obstructing the main access route to the barrio and other neighbourhoods in the west of Bogotá. As a protest, they set the bags on fire and an SITP bus suffered the same fate. The next morning, some hours after riot police had already dispersed the disturbance, the whole zone was left smelling like the dump where the rubbish should have been.

Mayor Enrique Peñalosa said of the riots: “I apologise for the discomfort that this problem has caused the people of Bogotá”. Nevertheless, he took the opportunity to make accusations of sabotage: “it’s a coincidence that last night I tweeted about a big cleaning operation we were about to make in Engativá and then a councillor said ‘let’s hope you don’t send the riot police’. It’s quite suspicious […] it is obvious that there are politicians who delight in the problems that affect Bogotá citizens”.

The problem with the rubbish in Bogotá is hardly new. In 2012, former mayor Gustavo Petro decided to change responsibility for waste collection from private hands to a public company, Acueducto de Bogotá and their rubbish collection division Aguas de Bogotá. Unfortunately, he did not properly plan how the change would take place and for three days waste piled up in the city. As a result, Petro was dismissed by the former procurador, Alejandro Ordóñez, in charge of maintaining public officials in check. Also, according to Ordóñez, the company wasn’t capable of fulfilling the task. 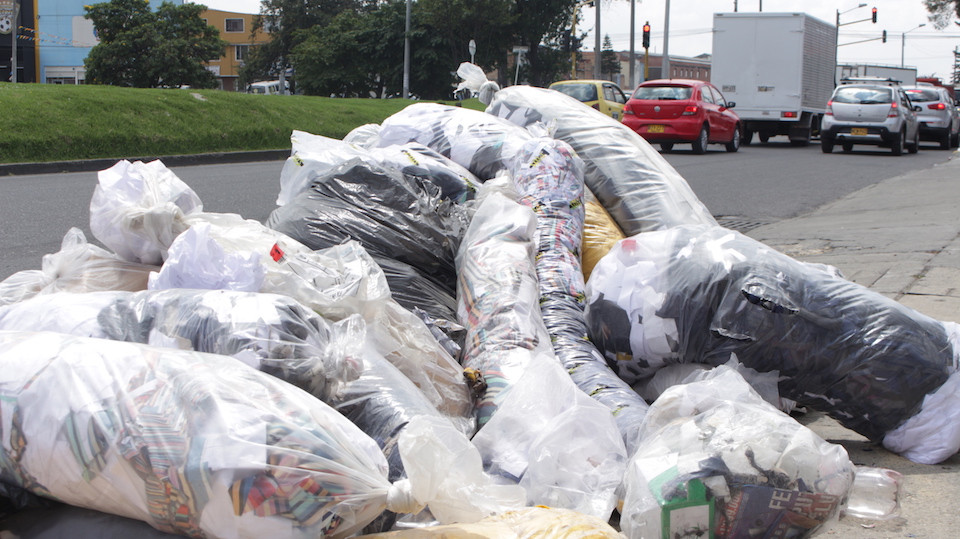 Although the private company Ciudad Limpia was in charge of 20% of the task, Aguas de Bogotá was fined because of “a violation in free competition by taking over the market” according to business watchdog the Superintendencia de Industria y Comercio. Because of its terrible economic status, Aguas de Bogotá wasn’t hired for refuse collection this year, leaving 3,200 employees with an uncertain work future.

As a result, on February 1, all those workers stopped their activities because there was no plan in place to help them be rehired by the new collection companies. What started as a peaceful protest ended in confrontation against the riot police, with a result of almost 70 garbage collector vehicles damaged.

With the new companies in charge of rubbish collection due to start on February 12, the mayor was forced to declare a health and environmental emergency in the city. Bogotá officials revealed that more than 18,000 tons of trash had already been collected in the first eight days following the start of the emergency.

While the trash seems to be disappearing from the streets, the procuraduría demands that the mayor’s office do something to solve the fate of the 3,200 former employees of Aguas de Bogotá.