A new photographic project aims to act as a form of therapy for the subjects involved. Anna Weldon explores the healing power of art

For Esmeralda Guzmán de la Rosa, finding her own voice through art is a thoroughly personal affair. But instead of creating the canvas, she is the canvas.

Guzmán and nine other models will be featured in Voces del silencio, a photography exhibition that represents models in an empowering way in order for them to cathartically face their emotions, as a “form of therapy”, she tells The Bogotá Post.

The 38 photographs, which were taken by Carolina Rojas, portray each person in their current or past struggle, highlighting the process of recovery and reflection.

Guzmán, the inspiration behind the project, was in an abusive relationship with her ex-partner. To cope with her pain, Guzmán converted it into art, painting her pain and the violence she experienced as her personal form of therapy.

She furthered her healing by posing for Rojas’ photographs, as a way for her story to be told through art.

“In Colombia there are a lot of people taking photos”, Guzmán explains, “but very few people with social and therapeutic goals. We are experimenting with healing through art”.

After having her photographs taken, Guzmán was asked by Rojas if she knew of other potential models with a similar desire to express themselves through photography. As a result, a friend with scoliosis is also featured in the exhibition. Another woman, a plus-sized model, will be featured as well.

“You can feel emotions in the photos,” Guzmán tells us. “It makes them visual.”

Voces del silencio will have a special inauguration on Thursday, March 10 at 6.30pm, with music, a tango and flamenco show, as well as aromatherapy, music therapy and art therapy. From March 11 to March 31, the exhibition will be accompanied by a variety of workshops – such as theatre, yoga and music, among others – as a complement to the art.

“The art is for everyone. It’s a vehicle for emotions,” Guzmán concludes. 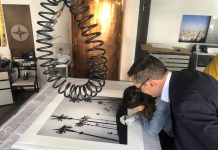