“We left Venezuela after they killed my brother in our house, in front of us. Next day they came back and told us to go or we’d be killed too,” the young woman explains. A small boy fidgets on her lap at the shelter where she stays.

“They were from a gang run by the local mayor. They said we were with the opposition, that’s why they came for us. Then I saw the same men in here in Colombia last week…” Her voice trails off in despair.

When we covered the Venezuelan migrants flocking to Bogotá last month, I was wondering how bad it could be for people to have come this far to live on the cold streets. Last week I visited three of the busiest border areas for Colombia and Venezuela – Arauca, Norte de Santander and La Guajira – and it all became clear.

“My husband was a fisherman. He was murdered for his boat. I had no way to get food so I came here,” says another mother I talk to in Riohacha, the capital of La Guajira. “I couldn’t stand hearing my child crying from hunger every night. We sold everything we had and left,” says her friend.

Their stories paint a picture of a country being picked apart like a cold cooked turkey: in Maicao, people are selling the window frames and the locks off their front doors back in Venezuela to cobble together a few Colombian pesos to travel onwards.

Or selling themselves. With a medical colleague I take a night drive around Cúcuta’s notorious Canal zone. “We’d started to get these streets cleaned up, but now look…” she says. It’s only 7pm but the shadowy sidewalks are thronging with teenage sex workers, all from Venezuela. “They’re young and inexperienced. They don’t know how to protect themselves.”

Further up the border an NGO medical clinic reports hundreds of new pregnancies from teenage girls 12 to 16 years old, and even the department’s usually conservative medical statistics show skyrocketing venereal diseases and a steep rise in HIV rates.

“Why don’t they declare it an international emergency?” says a local health official in exasperation.

It certainly seems odd that Indonesia’s earthquake – 59,000 displaced from their homes – grabs the world’s front pages whereas the millions of Venezuelans displaced or suffering in their own country barely get a mention.

Perhaps that is because the crisis has had little visual impact. Few journalists can operate freely in Venezuela, and migrants filtering into Colombia are camouflaged against the host country’s long-standing background of poverty and people who have been shifted around by decades of conflict.

That’s very apparent at a dusty informal settlement on waste ground outside Riohacha, where hundreds of Venezuelan families live in plastic-sheeted huts alongside a similar number of Colombian displaced families.

By all accounts, everyone gets along, bonding over mutual hardships and communal problem-solving. With a little help from NGOs and some UN agencies, they’ve started their own school for the kids. They are also united by the struggle to get health care, as local hospitals are collapsing under the strain. In this the Colombian families are no better off than the Venezuelans.

“After months, I’m still waiting for my paperwork to get the SISBEN,” explains a community leader, referring to the social security subsidy that will enable his family to get proper health care. In theory, migrants with the PEP permit can get the same, but in La Guajira there are impossible hurdles in the form of illegal payments for the registration process. “The government workers want to be paid $50,000 for each family to come here and register us,” explains one mother. “We simply don’t have the cash.”

Related: Long walk to the unknown, Venezuelan migrants arriving in Bogotá walking hundreds of kilometres from the border.

State hospitals do provide emergency healthcare to migrants in life or death cases, but people need help long before becoming a critical case. Some gaps are being filled by UN agencies and NGOs such as the Red Cross which runs a first aid clinic on the international bridge on the main highway that connects Venezuela to Cúcuta and Colombia.

It is there that I realise that the crossing is also a lifeline for wealthy Venezuelans. A well-dressed woman explains how she flew from Caracas to San Cristóbal then took the bus to San Antonio del Táchira and walked across to the Red Cross health post on the Colombian side to vaccinate her daughter. She had money, enough to catch a plane. Couldn’t she have just paid for the vaccines in Caracas? I ask. She laughs. “There are none.”

Still, she was one of the luckier ones who could fly. Most Venezuelans coming to Colombia run the gauntlet of dozens of formal and informal checkpoints where they risk being robbed, beaten or worse.

These irregular troops at the checkpoints are “peasants who have been given guns but no training and told to get what they want” explains Julio, a community worker in Riohacha who, with a church group, delivers 3,500 free lunches every day to hungry migrants. “The Venezuelan National Guard are bad enough, but the irregulars are out of control.”

I hear more of this from vendors on the waterfront in Arauca, where a constant stream of canoes carries goods to and from the two countries over the swift Arauca River.

Angelina, from Valencia, close to Caracas, explains her weekly routine of trying to take buses – which are getting rarer –  20 hours to the border, crossing to Arauca to sell coffee on the streets until she makes enough cash to buy rice that she will carry back to her mother and children waiting at home. The hard part is getting it back across into Venezuela.

“At every checkpoint the bus is searched, everyone must give something, otherwise we’re beaten. Or worse. I need to buy ten pounds of rice to get four pounds home. The guards take the rest.”

I hear plenty of worse stories from Venezuela: children slowly choking to death from throat abscesses that anywhere else in the world would be easily treated with antibiotics. Mothers hemorrhaging to death in empty hospitals after giving birth.

It is hard to verify these stories from outside. But impossible to ignore the people telling them. 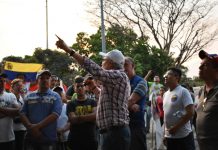 “February 23 or never!”: Cúcuta in centre of political storm as aid showdown looms 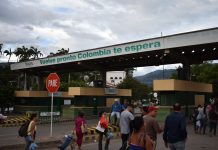