There have been plenty of memes and social media antics – true and false – this election. We picked a couple to make you smile. 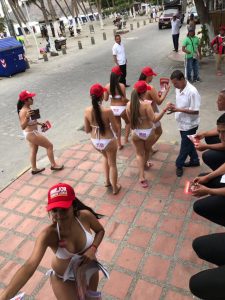 Germán Vargas Lleras was caught in an online storm last week after a batch of buxom broads were photographed ballyhooing the presidential candidate in Santa Marta, leaving little to the imagination. With the candidate’s name blazoned across their bikini bottoms, these fair maidens strolled down the promenade handing out flyers to onlookers, some of whom were enthusiastic, others less so. Such blatant objectification of women for propaganda purposes has led to much outrage and condemnation, an example of which is the trending twitter hashtag  #MujeresMejorSinVargasLleras. Vargas Lleras categorically denies the stunt was his doing. He denounced the scandal as a smear campaign concocted by his political rivals and vowed to investigate the contentious episode. If true, whomever the culprit of this flavoursome fiasco may be, it must certainly rank as one of the more ingenious ways of besmirching a political rival. 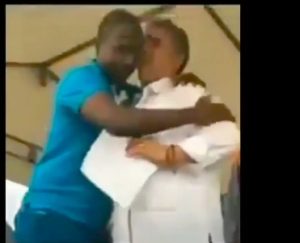 As he was hugged by a supporter in Tumaco last weekend, Iván Duque appeared to lose the use of his limbs. Instead of reciprocating the embrace as most humans would, Duque panicked: his arms remained by his side and his face contorted into a combination of shock and horror. Second time was the charm, however, as the hug was staged again and this time he delivered a flawless performance, involving two arms, passion and warmth. Unfortunately for the Democratic Centre candidate, this was not the version most people saw. Rather, it was the botched first attempt that went viral, leading many, including Gustavo Petro, to accuse him of racism (the man who initiated the hug was afro-Colombian). This lapse in reason gave substantial ammunition to the twitter army, who echoed Petro’s assertions. Duque could complete all of his future hugs with 100% accuracy for the rest of his life, but this would still be the one people remember. And that’s the game.

Petro’s shoes back in the limelight 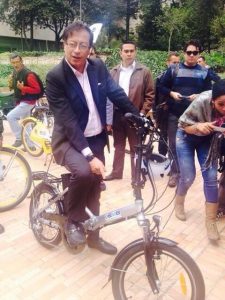 As the influence of social media grows exponentially, all of us must be wary of what goes online. Pictures, comments and much more have all led to the demise of many. One’s choice of footwear, however, would not often be atop the list of material that could be damaging. Yet this was the fate of Gustavo Petro, as a picture of him wearing expensive shoes from two years ago has resurfaced. And with a vengeance. Can’t we let bygones be bygones? In the words of Margaret Thatcher, ‘No, no, no,’ say the tireless twitter warriors. How can someone advocating socialism and claiming to fight equality afford to spend so much on a superfluous materialistic item? They say, perhaps with some justification. But whilst these shoes (Salvatore Ferragamo, for those interested) are indeed a pricey purchase, to ridicule them seems a curious thing. They could have been replicas, after all.