The cycling season officially starts on January 14 with the Tour Down Under. Plenty of escarabajos will feature in the nine-day Australian event. Esteban Chaves is the biggest name for team Orica-Scott, but no fireworks are expected from the Bogotá-born cyclist, as he is quietly preparing for the big races later in the season. Jonathan Restrepo, Marc Soler, Jarlinson Pantano, Sergio Henao and his younger cousin Sebastian Henao will also be representing Colombia on the tour.

Pedro Causil has one chance left to qualify for the World Championship speed skating in South Korea this year. The 25-year-old who trains in Calgary, Canada, collected one World Cup point in China this season, but not enough to be part of the 24 highest listed skaters on the 500m sprint. His last opportunity to claim a spot at the World Championships this season will be in Berlin on January 27 and 28.

Miguel Ángel Rodriguez keeps giving away terrain in the squash ranking. The 31-year-old Colombian was placed 14th in the men’s PSA ranking at the start of 2017, after a disastrous end of 2016, with four first round defeats and a third round exit at the World Championships in Cairo. He has dropped from fifth place where he was sitting 12 months ago. After a short holiday break in Santa Marta, ‘the Colombian Cannonball’ starts this year with tournaments in the United States. 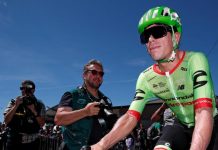