How did your theatre company, La Jácara Mojiganga come into to being?

The group was born in 2013 in Bogotá, with the intention of being an independent musical theatre group that would tell stories closer to our reality. The name comes from a book I read about the history of Spanish theatre. Jácaras were the first non-religious plays which dealt with people’s problems and disputes. Mojigangas were the first expressions of musical theatre. The actors sang and used eye-catching costumes. These concepts encapsulate the meaning of who we are as a group.

Why did you want to tell this story?

My principal objective was to bring musical theatre closer to our Latin American reality and environment, since musical theatre is an adopted genre, with stories that amaze and enchant us, but which reflect little or nothing of our feelings on this side of the map. This is precisely what El Bolero de Rubén tries to do – to tell a story that could happen in our country, from the perspectives of music, theatre, reality, and fiction.

What does the use of music bring to this play?

The songs are original creations for the musical. They’re indispensable to the storyline, since the characters use the songs to tell us what they feel, what they think, and what’s going on in their difficult lives.

Do you think that El Bolero is a realist work?

I think there’s a lot of realism to it, but it’s not a fully realist play. However, I would be lying if I said that it’s entirely a work of fiction. I based much of this play on things that I read, see, hear and feel. If Gabriel García Márquez created “magical realism”, let’s say that El Bolero de Rubén is “tragi-comic musical realism”.

What is the significance of the setting in Medellín’s París neighbourhood?

I wanted a name that had some kind of poetry or romantic feeling to contrast it with the brutal reality of the story. That’s how I found París, a neighbourhood which has a totally different reality from the French Paris, the world’s greatest symbol of romance.

What has the public response to the work been like?

El Bolero de Rubén offers a 65 minute journey full of different emotions, so each performance has as many interpretations as there are members of the audience. During El Bolero the public laugh at what they hear and weep at what they see.

What is the impact of the Theatre Festival on the cultural life of Bogotá and Colombia?
These events are of great importance to the city and the country. We need more art, more culture, more space and definitely more support.

El Bolero de Rubén returns for an extended six-week season at Casa Ensamble in July and August and if you’re in Bogotá you really shouldn’t miss it, even if your Spanish is not great (several friends of mine who fall into this category also found the play immensely entertaining). 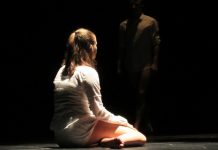