Sometimes less is more. You don’t need to destroy half the world to make an enjoyable action movie. That’s the case with Ant-Man, the most recent summer blockbuster from Marvel, an epic of minimalistic proportions that delivers what it promises: family entertainment.

This is the original story of Ant-Man, a superhero who lives in the same fictional universe as the Avengers. While well-known by comic book fans, he has now been introduced to mainstream audiences.

Scott Lang, played by Paul Rudd, is a skilled former thief. After leaving prison he wants to put his life together with the hopes of reconnecting with his daughter who lives with her mother and step-dad. In the process, he’s recruited by Hank, a rich scientist who invented a suit that can shrink a person to the size of an insect.

The mission is right up his alley: to steal a similar suit invented by Darren Cross. As Hank’s former protégé and current nemesis, Cross plans to sell the technology to the highest (but not necessarily most ethical) bidders.

There are a lot of familiar faces in the cast. For starters, Hollywood heavyweight Michael Douglas plays Hank Pym. Lost’s memorable leading actress Evangeline Lilly is Hank’s tough daughter and the villain is played by Corey Stoll, better known for his work on TV shows like House of Cards but now making a name for himself on the big screen.

But the most pleasant surprise is Paul Rudd’s convincing performance as a leading man. He always had what it takes: looks, talent, likeability… But we’re used to seeing him as the funny supporting character. In this film he finally got a chance to break the typecast.

Humour is key. Every once in a while, someone cracks a joke to lighten the mood and keep the movie away from the overly dramatic pretentiousness of other films of the genre. Known for making comedy films like Bring It On (2000) and Yes Man (2008), director Peyton Reed brings his jovial touch to the mix while keeping the movie gripping and fast-paced.

Although the main storyline follows the same predictable structure of the massively popular superhero movies, there’s a balanced combination of action sequences and chucklesome moments. The small scale fight scenes are quite refreshing as well, particularly in a time when computer generated massive destruction is the norm in the industry.

Family struggles, rural abandon and the plight of the working man are presented under the sombre spectre of burning sugar cane fields and a charred landscape in Colombian director César Acevedo’s critically-acclaimed debut film.

The movie, which notched up three prizes at this year’s Cannes Film Festival, follows Alfredo as he returns home after a 17-year absence to take care of his dying son, Gerardo. Here the elderly man meets his grandson and daughter-in-law for the first time, his failed relationship with his wife Alicia, and ghosts of the past hanging heavy in the murky air.

With minimal dialogue and an emphasis on visuals, the film looks at the struggles of each of the family members as they try to deal with the inevitable passing of Gerardo. Some hope for a new life far from the burning fields.

The setting and powerful compositions highlight the daily struggles of the agricultural workers. While Gerardo lies helpless, a victim of the dense smoke clouds that hang over the family, both physically and symbolically, the stubborn matriarch Alicia refuses to leave the harsh land behind.

Sadly, it is a gloomy reflection of the tough reality of many Colombians. Acevedo himself explains, “We wanted to tell this important story. It’s a project that I’ve been considering for many years now.”

With the exception of the two women in the cast, none of the actors are professionals, lending an air of realism and substance to the story, with the acting often playing a supporting role to the well-shot scenes.

For me, the story was so centred around the tight relationships within the home that the scenes depicting workers on the sugar plantations were superfluous. While highlighting important aspects of rural plight, this theme is explored so well through the microcosm of the family, that these segments added little to the story.

At times the film struggles to move away from the clichés of Colombian cinema. The extremely slow storytelling and slight over-emphasis on cinematography may suit the critics but will surely make it difficult for La Tierra y La Sombra to gain worldwide commercial success.

While the cast of downtrodden and emotionless characters surviving as best they can may not make for an easy or outright entertaining watch, I have no doubt that La Tierra y La Sombra will captivate viewers. 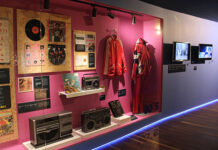