Home Azzam Alkadhi When the Party’s Over:

After his experience at the San Pacho festival, Azzam Alkadhi examines the realities of Choco in focus

So troubled was I by the stark contrasts on display in Choco, that I was keen to delve deeper into the region’s prospects.

The future appears uncertain, with many claiming that Choco is doomed to remain in the grips of poverty, isolation and destitution. True, there are higher than average levels of poverty and displacement in this region, but are there at least signs of hope?

At first glance, it appears not. Even putting aside the massively high unemployment figures, Choco has more than its fair share of problems. According to independent studies, around 80% of people don’t have access to basic necessities and human development indices rate this area as the most undeveloped in Colombia, on a par with Bolivia. On top of that, almost 10 percent of the countries’ displaced children can be found in Choco.

Yet it isn’t quite time to give up hope.

As one of the most biodiverse regions in Colombia, Choco has a spectacular amount to offer the tourist industry (even the fruits are different –Chocoano lulo will blow your mind). The problem up until now has been the area’s reputation, which has kept away the majority of tourists. Yet Choco can take comfort from the story of Colombia as a whole –  two decades ago, few people would have considered taking a holiday here, but now it is one of the hottest destinations around.

The region’s jungle is bursting with life and offers unrivalled opportunities for ecotourism on a grand scale. Furthermore, Choco is the only area in Colombia, and indeed the whole of South America, that has both a Pacific and a Caribbean coast. The potential for mass tourism is there, it just needs to be nurtured.

A 30-minute drive from Quibdo’s city centre is Tutunendo, a jungle village that feels much more isolated than the nearby motorway might suggest. This tiny area of Colombia is officially one of the most biodiverse areas on the planet and it also boasts the rather unappealing moniker of ‘wettest area in Latin America’. Yet it is this high level of rainfall that makes the area in and around the River Icho so replete with plant and animal life. With stunning waterfalls, beautiful river trips (on gondola-style boats), dense jungle and an incredible level of peace and tranquility, you might expect Tutunendo to be welcoming a high volume of tourists.

Yet, as a result of neglect and corruption, there has been very little investment in the region. The infrastructure is basic and poorly maintained, while tourist services and amenities are underdeveloped. The roads in and around the capital are largely dirt roads, while the majority of buildings appear to have been ignored for decades.

However, with the massive potential that exists here, and with the authorities slowly realising that Choco is a region with plenty to offer, there is little doubt that investment will increase.

The challenge lies in ensuring that tourism and investment increase while simultaneously protecting the area’s precious ecosystems.

In addition to the potential for tourism, Choco is incredibly well-endowed with natural resources. There is timber in abundance thanks to the jungle, while river and sea fishing provide another major source of trade, which nonetheless needs to be regulated and promoted.

Choco is one of the world capitals of platinum and there is plenty of gold, silver, limestone and copper too. With such an array of precious raw materials, the region should be at the economic and social peak of Latin American society. However, these industries have historically been both unregulated and victim to shocking amounts of corruption.

Perhaps this explains why levels of industrial development in Choco are lower than anywhere else in Colombia. In fact, the region only accounts for 0.5 percent of Colombia’s entire GDP.

The region’s greatest resources are not its gems though, but the friendly and enterprising people. I believe they are some of the most welcoming people I have met in the whole of Colombia, a claim which I would not make lightly.

The vast majority of Chocoanos are desperate to shake off the shackles of their region’s negative image and pull Choco into the future.
Yet hunger and desire alone are not enough. Without the political and financial means, there is little that people here can do by themselves. The responsibility rests in the hands of politicians and investors, who have the power to promote and improve the region by working alongside the people that live there.

Currently, there are a number of initiatives in operation that do offer hope for the Chocoanos- such as projects helping to build houses for displaced people with no resources, offering business courses or making attempts to clean up the streets. There is even a project called ‘Cine en tu barrio’, which offers locals the opportunity to watch films for free in their area.

These are of course humble beginnings, but they are just that, beginnings. With the potential that the region has and the right sorts of investment, there is no limit to how far Choco can grow.

And nowhere is this hope and optimism better displayed than during the San Pacho Festival. Whether it’s the reckless disregard for health and safety demonstrated by Quibdo’s seemingly inexplicable obsession with burning and exploding things, the old men playing aggressive dominos in the marketplace, or the mothers dancing around wildly with new-born babies on their shoulders, San Pacho brings together elements of Afro-Colombian culture that at times seem confusing and incompatible but which, brought together, create one of the world’s most fascinating sights.

UN asked to investigate the murder of indigenous governor in Chocó 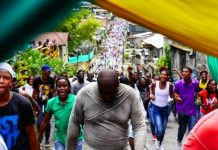