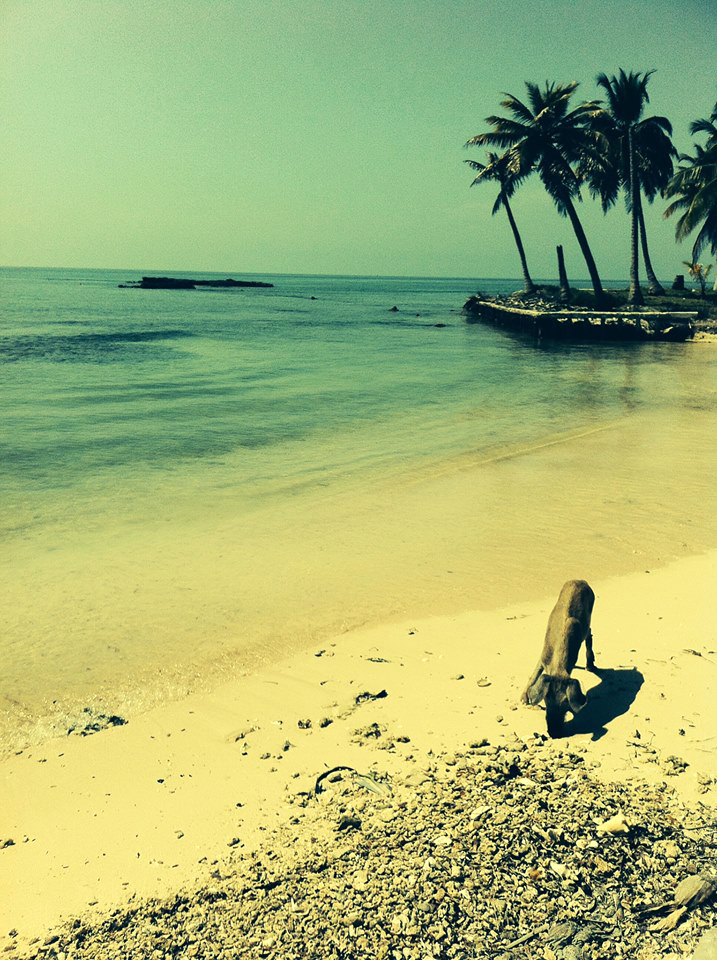 Despite the false promise of being dropped off at the bus station, we found ourselves deposited in front of a secluded petrol station in the middle of the night, disoriented and quickly surrounded by bicycle taxi men telling us that they were our only option of onward transport. We were horrified by the idea of obliging these poor men to cycle the weight of all three of us and our overly packed rucksacks, (including, seemingly the entire life possessions of my friend.) But finally, at their insistence and for an extremely low fare of $5,000COP, two bicycle taxis took us and all our things on a night city tour of Tolú.

From the moment we arrived, everyone was insistent that we should buy our tickets because the boat leaves early. But the boat to where, exactly? With the mention of islands (plural) and for a price of $30,000COP, we thought why the hell not? And Tolú, planned as only a passing point to get to Carpuganá, turned out to be the gateway to my favourite place in Colombia: the islands of San Bernardo.

The next morning we set off on that early boat for an organized tour visiting some of the ten coastal islands of the archipelago of San Bernardo.

Islote is famous for having the highest population density on the planet. But the real beauty of the trip was revealed when the boat returned the other tourists to Tolú and we were left deserted on Mucura with the whole island to ourselves.

Forget San Andres – these tranquil islands were divine, with all the paradise requisites of transparent sea, white sandy beaches and tropical fish. We were even rewarded with our own private beach thanks to our new-found friend Angelo, a local tour guide who can be found at the dock or at the end of the pier smoking weed. A bizarre island feature was the pig population roaming around: seeing piglets sunbathing on the beach was a truly strange but entertaining sight.

We slept in hammocks, which were rented out by a kind village woman, for only $10,000COP, positioned so that you felt like you were floating above the sea.

But perhaps because of the spot’s envious location, it was rudely invaded by a parade of goats claiming their territory in the early hours of the morning! This unwelcome disturbance was soon forgotten at the sight of a breathtaking sunrise shining every shade of yellow rising behind the palm trees, all taken in from the comfort of our softly swaying hammocks.

The charming island village, which has a ratio of ten children to each adult, offered one small convenience store where you could buy simple foods and snacks.

Of course, the better option was the “eat what you want from the sea” service, for a cost of $15-25,000COP depending on the request. We were not disappointed with our sea-fresh octopus and prawns, complemented with a resourceful romantic dinner set-up on the beach shore, where we found three child-sized red plastic chairs, a small candle and a few Aguila Lights as a finishing touch. Angelo accompanied dinner with a wealth of dramatic, and hopefully exaggerated, sea tales.

The next morning, thanks again to Angelo, we set off with a local fisherman who owned ten weather-beaten snorkeling kits. On his speedboat we headed to a nearby sunken island that had been almost completely swallowed up by its surrounding shallow waters. There remained only a small patch of land with a scenic TV cable on it, but it offered impressively colourful sea life all around. However, the fisherman seemed more intent on sending us to dive down and collect enormous pink seashells for him. The shells contained giant ‘caracols’ (sea-snails) – an island delicacy that costs more than lobster. To us these grey slimy snails seemed less than appetizing and we were more than happy to give up our hard-dived treasures.

With a rushed holiday itinerary, that same day we took the 50-minute boat ride back to Tolú to continue our journey up towards Panama. But even now I regret not extending my stay on those islands to discover further hidden beauties. So far from the rush of city life and not yet capitalized on by mass tourism, they offered the ideal escape, as well as a glance at a Colombian reality that can be hard to find elsewhere.

Bogota Top Teams Out Of Contention For Liga Postobon Crown