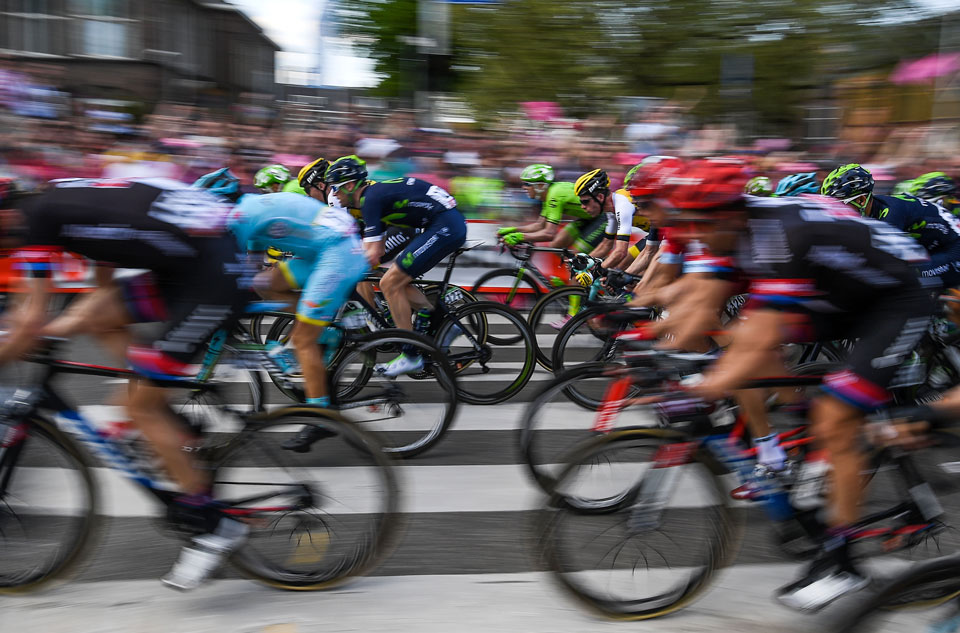 The battle for the Giro d’Italia, the Maglia Rosa, began on May 6 in the crazy flatlands of the Netherlands.

The 2016 edition will race through the beautiful Calabria province in the south of Italy, then take the riders north, passing through the Apennine, Friuli and Dolomite mountain ranges. After brutal final-week stages in the Alps, the riders who still have power in their legs will reach the finish line on the streets of Torino on May 29.

The most challenging stages will be on May 27 and 28, when the riders will take on the gruelling summits of the Alps and altitudes of over 2,000 metres.

However, the peloton will be missing two top cyclists, Nairo Quintana, winner in 2014, and reigning champ Alberto Contador. Both former winners have chosen to skip this edition to give themselves the best chance possible in July’s Tour de France. Have no fear, though: the start will still feature big names like former Tour de France winner Vincenzo Nibali, 2012 Giro winner Ryder Hesjedal, Mikel Landa, Alejandro Valverde and Rafal Majka. With six escarabajos also present in the race, the Colombian spectators will have plenty to look out for.

Rigoberto Urán is the name that jumps out, the 29-year-old Olympic silver medallist was second in the Giro in 2014, behind countryman Nairo Quintana. In 2015 he couldn’t live up to expectations in the Etixx-Quick Step team, in which he was not the team leader. In the winter Urán made the transfer to team Cannondale, who showed full confidence in the Antioqueño by making him the captain and only leader of his team.

Esteban Chaves saw his breakthrough in the Vuelta a España last year. The 26-year-old from Team Orica-Greenedge is the team captain this season in the Giro. But with the 21-year-old sprint revelation Caleb Ewan also present, Chavito won’t be the only rider attracting attention in the Australian team.

Carlos Betancur is back in the peloton after two years in the empanada shop. The 26-year-old was seen as an outsider for the Tour de France victory in 2014, when he was suddenly axed from the AG2R-La Mondiale team sheet. He appeared once more for the Vuelta a España, but finished in the penultimate place out of 159 finishers. This year he defends the colours of Team Movistar, where he joins fellow escarabajos Nairo and Dayer Quintana as well as Winner Anacona. Betancur recorded his first stage victory in Spain earlier this year and will serve as key domestique for team captain Alejandro Valverde.

Sergio Henao is left out of the Team Sky line up for this edition of the Giro d’Italia. Henao was named one of the favourites after coming second in the Vuelta al País Vasco last month, but the reopened investigation about discrepancies in his blood passport has raised suggestions of doping. Team Sky have decided to keep him out of competition until the origin of the discrepancies are discovered. In the absence of Sergio Henao, his younger cousin Sebastián Henao will be representing his country in Team Sky. He will have a similar task to Betancur, helping his team captain Mikel Landa to the Giro victory.

28-year-old Darwin Atapuma will be representing the Nariño department of Southern Colombia in the race, with a free role in the BMC Racing Team. The name of Daniel Martínez is new to the peloton – the 20-year-old cyclist is racing for Team Southeast-Venezuela and is the youngest rider in this edition of the Giro d’Italia.

It was much easier to predict the winner of the last edition of the Giro d’Italia, when Alberto Contador wrapped up his seventh Grand Tour victory. This year, with the absence of the Spaniard, there are a range of favourites who will take the battle for the Maglia Rosa all the way to Torino.

Vincenzo Nibali is favourite number one and, barring an accident, we should see him on the podium on home soil. Mature, experienced, a former winner and showing signs of good form in the Tour of Oman in pre-season, he will be in the thick of the action.

This Giro will be the most important test of Mikel Landa’s high aspirations. After breakthrough performance last year, he will be the sole captain for Team Sky. It could well become a similar situation as those of Sergio Henao or Roman Kreuziger, who both disappointed just after their breakthrough year. The weight of expectation can prove too much for some.

Alejandro Valverde is always a force to be reckoned with, and with Carlos Betancur as a luxury domestique he can’t be ruled out. Expect a lot from Ilnur Zakarin, who is a decent time trialist and an exceptional climber, and went head to head with Nairo Quintana during the recent Tour of Romandie.

If the weather is good Rafal Majka, can be a dark horse. Steady progress, with a breakthrough podium spot in the last Vuelta a España, bodes well for the young Pole.

As for Colombians, we can expect anything. It’s equally possible we will see escarabajos on the podium or that they won’t even reach the top ten. Rigoberto Urán’s form seems to be coming along just in time, after promising performances in the Tour de Romandie and Volta a Catalunya. Subsequently, Urán seems to be quite brash about his chances. Whether Esteban Chaves is in good enough form to pose a threat is unknown as he hasn’t shown much of himself yet this year.

The race will be broadcasted every morning by Señal Colombia with finishes roughly between 10am and 11am.

Putting the FUN in Fundacion