Home Sport Cycling Sports to watch in March and April

Sick of finding out about the big sports events only after they’ve happened? We’ve gathered together all the sporting highlights of the weeks ahead, so prepare yourself for a month of excitement with our guide to these unmissable moments. – all times mentioned are in Colombian time (UTC -5)

Colombia are starting their preparation for the World Cup in Russia with two friendlies in Europe. Los Cafeteros are set to meet World Cup title candidate France, and then Australia, on el viejo continente. France vs Colombia is on Friday, March 23 at 3pm in Stade de France in Paris, where manager Didier Deschamps held up the World Cup trophy in 1998. After this, Colombia vs Australia takes place on Tuesday, March 27 at 2pm in Fulham’s Craven Cottage stadium in London.

England and France are a bit of a trip from Colombia, but local sides Atlético Nacional and Millonarios continue in the Copa Libertadores with Atlético Nacional vs Delfín from Ecuador on Wednesday, March 15 at 7.45pm in Medellín while Millonarios travel to Avellaneda in Argentina for their visit to Independiente on Thursday, March 16 at 7.30pm. If Medellín or Argentina is still a bit far away, then there will also be Liga Águila games in Bogotá every weekend.

Fernando Gaviria was going to be the only Colombian cyclist with realistic chances in the spring Monuments coming up this month. But a crash that caused him a broken hand ruled him out of the Milan-San Remo on March 17 and the Tour of Flanders on April 1, races he had set his eyes firmly on. He could be back for Paris-Roubaix a week later on April 8, but is more likely to set his sights on the Tour de France. The other Escarabajos are set to continue their season in the smaller races in Spain and Italy in preparation for the Giro d’Italia and Tour de France later in the year.

For the runners in Bogotá, there are also some big events coming up. On March 18 the Night Race 10K will take you through Bogotá by night. The race starts at 7pm with start and finish at Centro Comercial Gran Estación. If you’d like to support the Colombian army, the Carrera por los Heroes 10k on April 8 will also lead you through the capital with start and finish near the fallen heroes monument on Calle 26.

Whereas Colombia was represented for the first time by four athletes at the Winter Olympics, the Paralympic Games in Pyeongchang will have to do without a Colombian presence. The event runs until March 18. 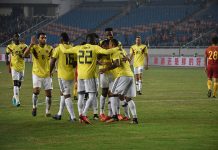