Carlos Villegas, member of the Colombian Olympic Academy,  takes a look at the year ahead

The Olympic Charter defines an Olympiad as a period of four years, beginning on January 1 of an Olympic year and ending on December 31 four years later. The next Olympiad will begin on January 1, 2016 before the Olympic Games in Rio de Janeiro.

So what might 2015 hold for Colombian sport? It would be nice to think it could be the best year of this Olympiad, but the sporting calendar makes it impossible to compare years in this way. There is no Olympic Games or FIFA World Cup to look forward to this year.

But 2015 will still hold many opportunities for the world’s athletes to compete, and we hope for Colombian athletes to shine. The two most important sports in Colombia, football and cycling, offer us great opportunities for success. In road cycling, we can say that, this year, our Colombian escarabajos (“beetles”) will be among the favourites in each one of the three big races: the Tour de France, the Giro d’Italia, and the Vuelta a España. With previous victories in the latter two events, winning the Tour will be the big goal. The big event in football will be the Copa America in Chile, which we won in 2001 here in Colombia and we hope we might be able to win again.

As for multi-disciplinary sporting events, in 2015 we will participate in the Pan American Games in Toronto, Canada. We hope to continue to improve our position and bring home more medals, after finishing in 6th place at the last Games in Guadalajara, 2011 with more than 24 medals, 10 more than in Rio four years prior.

We have high hopes that our athletes might continue the success they have found in recent years across a range of disciplines. In 2015, combat sports (wrestling, judo, taekwondo), motorsports, racket sports (tennis, squash), track and BMX cycling, athletics, swimming, in-line skating, golf, archery and weightlifting, among others, should bring us even bigger triumphs than those already achieved. There’s also lots to watch out for in the team sports such as rugby, futsal and indoor football.

Finally, it is not only our athletes who will push themselves to excel. Colombia will test its management abilities and capability to host major national and international sporting events. In November, we will have the big challenges of our 20th National and 4th Paranational Sporting Games in the departments of Choco and Tolima, all after the World Youth Athletic Championships in Cali in July.

Carlos Villegas works as an advisor to the director of COLDEPORTES, as well as an Olympic volunteer and a fellow of the Colombian Olympic Academy. 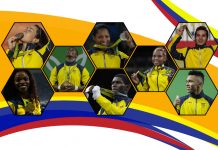