Photo: The first AFL game for women in Bogotá is only the beginning of a bright future.

Women’s AFL is off to a great start in Colombia. The Bogotá Bulldogs, who introduced Aussie Rules to Colombia at the end of 2016, started a women’s team this year, and they’ve already got an international fixture.

Although AFL is fairly new here, there’s been immediate interest due to the similarities with rugby and the popularity of women’s rugby – in 2016 Colombia’s women’s rugby sevens team competed in the Olympic Games for the first time in history.

Related: Everything about Aussie rules football in Bogotá

“Australia is very far away so we had not heard of this very strange sport, but once I started I couldn’t stop,” Yudy Benavides, one of the new players to the game said. “It’s a great way to test our strength, to keep fit, and to meet people from all across the world,” she added.

Team captain Karen Cifuentes chipped in: “There aren’t many sports like this open to women in Colombia so this is such a unique opportunity, I want to share it with my country-women far and wide.”

The footy club has also received a small grant from the Australian Embassy to support its programme for vulnerable young people and women. Australian Ambassador Sophie Davies tweeted, “Fantastic to see women’s AFL continue growing in Colombia with a 100% local team.”

And the team have their sights set high – they are already hoping to compete internationally. Erika Poveda, a Colombian national rugby player who’s now turning her skills to footy, said, “I hope the club keeps going so we can make it to the international AFL cup in Melbourne and represent Colombia there. We know some Australians have a negative image of our country – like some people do of women. We want to smash those images and kick goals.”

Poveda won’t have to wait long for her first international match – there’s a friendly against the Denver Bulldogs here in Bogotá on May 18. The Denver club will be bringing both a men’s and a women’s team to the capital.

Colombia Connection: Australia – what to didgeridoo? 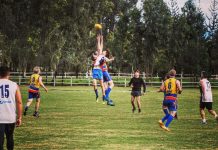