Home In This Edition The crocodile tears of El Lagrimon 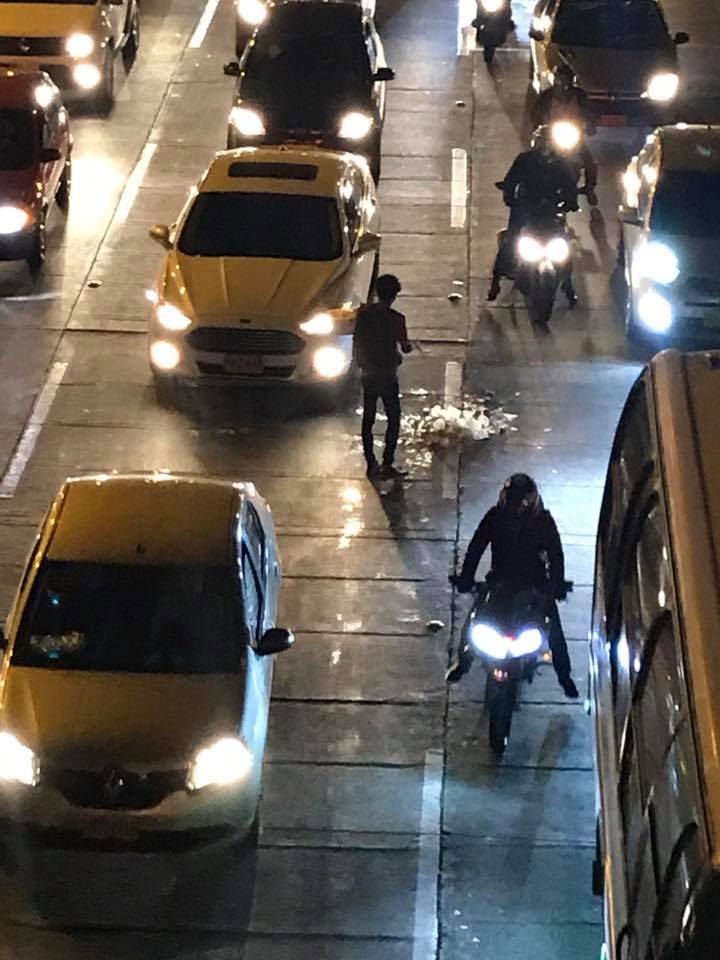 A while ago I was waiting on my motorcycle at the red light of a high volume traffic lane in Bogota, where rush hour had already done a fair share of silting up the cars, trucks and motos.

More concretely, I was heading towards work. For reasons unknown to me, I had taken up a job as an English teacher in Bogotá.

Like any responsible profe, I had been preparing my lesson in my head during the ride (What do you like about Colombia? Tell me about your family. Where would you like to go on holiday? And then filling up the rest of the time on the joys of present perfect vs simple past) 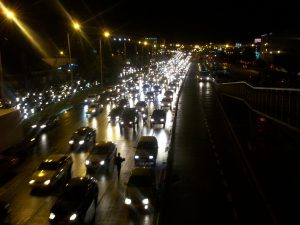 Bogota rarely has endurable weather, so it wasn’t unusual that I performed this rehearsal in the sad drizzling rain, while I waited for it to turn green. And then I saw him coming.

He was a street vendor and he held a full plate while slaloming past the stationary cars to sell his goods. At first sight, they looked like ice creams but it might have been pudding from where I was.

This informal economy is known to all in Colombia. Entering buses with little more than a bag of lollipops. Men with cheese, mandarins, selfie-sticks, rearview mirrors, toothbrushes and dart boards in public squares. If you hadn’t experienced it, you couldn’t make it up. If you could imagine it, someone somewhere in Colombia is offering it to you under your nose or through your car window. On street corners, out of a carrier tricycle, with a carton box pinched under the arm, on a bus and on the roadside.

In this case, the bloke worked at the traffic lights, utilizing the 3 entire minutes between red and green to generate an income.

Since I was on a moto and not too keen on eating ice creams in the drizzle, I’d already made my decision to decline when asked.

Before I could look up to see if the lights had turned green, it happened.

The man, a meter in front of me, fell over, his ice creams in tow. 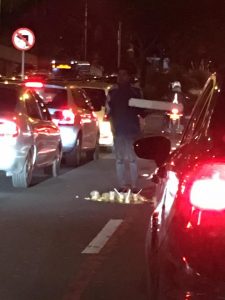 Thump. His plate full of ice cream-like pudding (decorated with those wafers that in the best case don’t taste like anything, and worst case taste like cardboard) smeared across the road.

Could it have been sadder? Together with the ice cream, it looked as if the man himself melted all over the road . His expression, his whole pose, his whole…well, life was tragedy personified. He looked like the statue of Rodin called ‘Desperation’. He sat crouched, his head bent over, staring at the ground with his teary eyes, on his knees, his income melting away.

I checked the light. Still red. Ok, maybe I still had some seconds. I dipped into the left pocket of my pants and fished out some bills for him. ‘Here you go, hombre, what a pity, happy to help you.’ I offered. The man got up, took my money and mumbled that God would bless me.

Next to me, there was a Transmillenio bus, overcrowded with people. Of course, they had witnessed the pitiful event of the man-with-the-plate.  I  was secretly pleased to have had and audience that had witness my noble gesture. The light turned green and I sped away.

The good Samaritan in me was ecstatic until, a few days later, I found a news item online. A beggar made 150 euro on an average day in a rich neighbourhood in Bogota. This was generally thanks to a horrible flesh wound on his leg that he extensively exposed and that unchilled even the most petrified heart to compassion and a corresponding donation. It turned out that his damaged leg was a scam, a mask made of a bunch of synthetics.

Almost immediately another movie came up as a suggestion. ‘El Lagrimon‘, or ‘the Tearjerker’. I clicked.

Here’s what it said:

“For 3 years, El Lagrimon has wandered through the streets of Bogota, with a range of products, often presented on a plate as he circles through stationary traffic. At a given moment he drops the plate intentionally, after which he strikes a theatrical pose, expressing loss and despair. Unknowing bystanders see the action with a dim view, feel compassion and give an empathetic contribution to compensate for the bad luck of a brave man trying to make ends meet. This way, El Lagrimon earns 3 times more than when he would sell the products at the common price”. 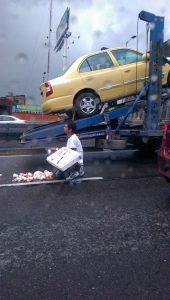 Fooled by a man that doesn’t sell ice cream or pudding but compassion  by spilling ice cream on asphalt. His following is such that it even has his own Facebook group.