Having investigated a number of restaurants in the La Zona G, I find myself frequently coming back to La Fama, Colombian Spanish for The Butchers.

Located just on the edge of the main strip this lively, bustling eatery is a great place to meet friends and chew the fat (ho ho). A stripped, back-to-basics style, the decor feels very unpretentious which is also reflected in the menu.

As you would expect, the speciality here is meat. However, this is no run of the mill steak house. La Fama models its menu on an American deep south BBQ; specifically meats that have been smoked for many hours. The result is mouth-watering cuts that smell as good as they taste.

Boasting brisket to pulled pork, and chorizo sausages. A single serving of 100g any meat is 15 mil. At first this may seem cheap, but the prices can quickly add up when you throw in side orders. The Mac and Cheese (12 mil) is made with deliciously sharp cheddar but the size of the bowl is a bit underwhelming.

If you’re sick of overcooked meat and disappointing asados, then this is game changer you’ve been waiting for.

The Quinta Camacho is rapidly becoming the place to go for chefs with something to prove. The quality of fish in La Despensa de Rafael, and the swankiness and assured cooking of Bruto mean that newcomers face tough competition.

It was with high hopes then that I arrived at Nueve. Tucked away at the back of a design/clothes shop, it can be difficult to find.

However, to my regret, this is probably for the best.

Upon arriving, I was ushered to a long bench with low table, not really conducive to eating, but comfortable enough. The restaurant is adjoined to the shop, and as there is no division between the two, you could equally be found asking for the bathroom or the changing room.

I was immediately recommended white wines, after saying I wanted a red, and finally decided upon a great Rioja from what is a very extensive wine list. You can order anything by the glass, which is nice if you want to sample some wines.

I arrived 20 mins before my dining companion and the waiter offered some bread while I waited. This took an extraordinary 40 mins to arrive! The wine we requested with the meal was then not available, and instead the sommelier suggested a bottle at double the price. A suggestion we didn’t take.

We were largely ignored by the staff, and chef!, who was strangely wandering the around the restaurant chatting with his friends.

Unfortunately, he had clearly left the pot, and containing food, off the boil.

The menu seems confused about what it wants to be. It is supposedly tapas, but nothing stood out as traditional Spanish fare.

Two tiny tasteless empanadas with gorgonzola and pears were 15 mil. Perhaps the biggest calamity was what was essentially tinned tuna atop a soupy rice; this masquerading as a risotto.

The wine list is excellent but the food, service and atmosphere are sadly not on par. 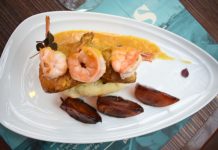