Systema Solar frontman Walter Hernández Romero speaks to Phoebe Hopson about the band’s latest album and the philosophy behind the group.

“Our music is without complaints,” says Walter Hernández Romero, raspy vocalist and lyricist from Colombian group Systema Solar, as he explains the group’s commitment to tackling serious topics in their music but in a fun and easygoing way.

Romero is serious when he talks about the launch of the group’s third album Rumbo a Tierra, which translates as Towards the Earth.

It’s an electro-tropical stand against environmental destruction, and, at the same time a celebration of mankind’s diversity. You won’t find any negativity here, as the group continues to daringly merge rhythms and electro sounds in what has been described as the ultimate sonic tomfoolery.

The track ‘Somos la Tierra’ (We Are the Earth) is a protest against the imminent environmental damage of  La Colosa, a large-scale mining project in Cajamarca. However, the message is delivered to the sound of the vallenato accordion and a catchy chorus.

Romero explains, “We want to connect issues in Colombia with those outside, but we do that by making people dance and connect with each other.” Systema Solar want to preach the message but let the listener have fun at the same time.

‘Champe Tabluo’ is a funky mongrel of a track that interlinks the world of deep South blues with Caribbean champeta, the rhythm of Systema Solar’s home turf. Romero’s voice is raspier and more soulful than in other tracks, but the mid-tempo champeta rhythm keeps the song from sounding too depressing.

These wild fusions of opposing worlds come from the group’s collaborative and fun approach to songwriting. “I’m not a beat maker,” admits Romero, “sometimes the lyrics come first, like in ‘Champe Tabluo’, but other times Juan Carlos Peregrino – our producer – has the beat, we just jam and mess around.”

‘Rumbera’ is the album’s standout track and is the official soundtrack to the FIFA 2017 video game. This party tune is a celebration of women of all shapes, sizes and orientations.

“The song is in praise of all those women who don’t need a man to have fun at a party,” says Romero. “Vanessa Gosh, our visual artist came up with the video, all different types of women are dancing and we are just in the background.”

The year ahead looks good for Systema Solar as they continue to build on and increase their national presence – watch this space for details of their next tour. “Our aim in concerts is to break down those barriers between people, show that there is a human connection, we are all citizens of the world.” The group’s attitude towards mixing rhythms and visuals, and addressing important issues sends a clear message to the listener: the distances between us are not as big as we think. 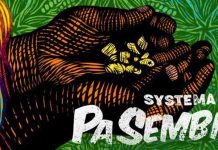