Vade Retro Gypsy Circus, September 4-20, Teatro Varasanta
An outlandish cabaret show, bringing together some of the most important artists the city has to offer. Music, dance, theatre and circus join forces in a hedonistic display of creative talent, including acrobatics, physical theatre, monologues, aerial dancing and much more. At Vade Retro Gypsy Circus, anything can happen. Tickets from $30,000, available through tuboleta.com.

Festival Yaveria, September 9-13, La Ventana
A festival promoting emerging artists and bringing together new artistic and musical projects, celebrating the capital’s rich cultural offerings. Art, cinema and music from Bogota’s best and brightest talents (with guests from Argentina, Peru and the United States), with a number of workshops. For full info on line-ups and pricing, visit yaveria2014.tumblr.com.

26th International Jazz Festival, September 9-14, Teatro Libre
Some of the finest jazz groups from Colombia and around the world take to the stage in the capital. Tickets for each event available from tuboleta.com.

Bogota Creative Commons Film Festival, September 24-28, Cinemateca Distrital
This film festival, based on the Barcelona Creative Commons Festival, comes to Bogota for the first time. The idea is to create an educational and audiovisual space for people to learn about and discuss current trends and products relating to open licences and collaboration. There will be talks and discussions and numerous creative commons-licenced film screenings.

13th French Film Festival, September 24-30, Various Venues
With over 65 French films, some of which are introduced by their directors, including some remastered classics and animated movies. For more info, visit www.cinefrancesencolombia.com.

Oktoberfest Bogota, September 24-October 4, The Monkey House
You don’t need to be in Germany to enjoy some great German beer and celebrate Oktoberfest. There will be a number of special guest beers, beer tasting sessions and German food, as well as competitions with plenty of prizes. 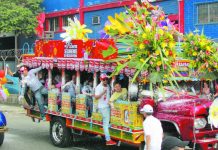