Home Chris Bell The plight of the Samaná River

Chris Bell enjoys the rush of beauty and adrenaline as he rafts down the Samaná River, a real life Magia Salvaje set which he hopes will not be lost forever

The Samaná River is born in the high, misty parámos of Sonsón in eastern Antioquia. It snakes through jungle-covered tropical canyons before eventually merging into the channel of Colombia’s great river, the Magdalena, in Puerto Nare. The Samaná is one of Antioquia’s last uninterrupted rivers, and passes through some of Colombia’s most unique and threatened ecosystems during its course. Sadly, the Samaná is under threat due to a dam project which would flood vast stretches of the biodiverse valley through which it winds. However, it’s incredible Class IV rapids offer hope for the Samaná in the form of adventure tourism.

The dam in question has been under discussion for some eight years, finally getting the go ahead in July 2015. Work on the Porvenir II hydroelectric project is slated to start in less than a year. The development delays have been caused by opposition from local communities.

I was invited to raft along a 40km stretch of this remarkable river by Expedition Colombia and its founder Jules Domine. Jules is a world-champion kayaker determined to highlight the plight of the river, as well as its tourist market potential, in a bid to convince the powers-that-be to halt the project that would result in the destruction of the Samaná. I was joined on the trip by some of Colombia’s pre-eminent filmmakers and environmentalists, as well as the renowned author of ‘One River’, Wade Davis. We enjoyed a night at the nearby Rio Claro reserve, heard a series of lectures on the ecological importance of the Samaná, and headed to bed early in anticipation of the next day’s trip.

The day began ominously – as a heavy tropical rain pounded down I stood shivering in my life-jacket and helmet, clutching my paddle, on a rocky beach on the banks of the river. The dawn mist settled heavily on the canyon rim and as the river snaked around a curve into the invisible beyond, I felt a surge of nervous anticipation at what was to come. We went over some important safety drills with our rafting guide (which as it turns out I would need later) and set off to find some adventure. As we pulled away I spotted a Beautiful Woodpecker, a species endemic to Colombia, nesting in a dead tree by the bank. This sighting lifted my spirits and emphasised the remarkable biodiversity of this threatened ecosystem. The following seven hours passed by like a dream, as the canyon hugged the banks of the river, and mist-shrouded jungles tumbled from its walls in a tangle of thick tropical vegetation.

Toucans cried from high Ceiba trees, and electric blue morpho butterflies lazily glided over our rafts. Around every turn was another foaming set of rapids, which we somehow navigated by following our guide’s precise instructions and paddling as if our lives depended on it (which they might well have!) Giant waterfalls that anywhere else would have been popular tourist attractions thundered from the canyon high above, merging with the wild waters of the Samaná below. I felt incredibly insignificant in the face of the untouched jungle and the raging raw power of the river, and deeply sad that this special place might well not exist in years to come.

The final rapids of the day posed a challenge. We pulled over onto the river bank while the guides assessed the situation. We eventually decided to go for it, and set off into the wildest rapids yet. Our group navigated the first drop easily enough, but were blindsided by a large wave which flipped our raft with breathtaking ease. I was plunged into the raging waters before being pulled out by a nearby kayaker, slightly shaken but thrilled by the experience. The rafting here is truly incredible, and has the potential to attract thrill-seekers from all over the world, eager to explore this untouched wilderness. Rafting might well be the salvation of the Samaná.

The Samaná River dam would condemn this valley to destruction beneath the dead waters of a reservoir built to generate power that is likely to be sold to other countries, based on Colombia’s current internal energy production and soaring consumption.

Rivers, forests, rare plants: all would be swallowed up by the waters of “progress” and lost forever. We all watched Colombia Magia Salvaje, marvelled at what this wonderful country contains, and shook our heads in sadness at its destruction: this river is that wild magic and it is under threat. So make the effort to raft the untouched paradise of the Samaná River, as it may soon be too late for this beauty which must be shared and appreciated by future generations.

The three day Rio Samaná trip costs COP$900,000 for international travellers and COP$800,000 for locals, leaving from Medellín or Cocorna. 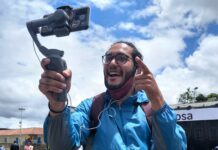