Challenge yourself to a sayings quiz, as Diana Mejía explains the quirks and uses of these oh-so-important Spanish proverbs.

Los dichos y refranes, Spanish proverbs and sayings, are an integral part of a regional culture and identity. Mastering them can be particularly helpful, as a single line can convey thousands of years of oral history, and with it, an incredible amount of information.

Try thinking of the last time you used the phrase “When in Rome!”. What words would you have had to have said to express the same idea? Maybe something along the lines of “Well, since I’m here, and you guys are having a beer, then I guess I might as well have one too!” See my point?

So, let’s start with a game. All of the Spanish proverbs and sayings listed below have an English equivalent, and although they might not use the same analogy, they do drive the same message home. As you complete the puzzle, try to think of why some might be more similar than others…

Finished? Great! One thing that might have struck you when doing this exercise is the verbosity of the Spanish proverbs. While English analogies tend to be quite direct, “You snooze, you lose”, its Spanish equivalent tells the story of a poor prawn that fell asleep and was swept away by the current! Not to worry though; in spoken Spanish, most of the sayings can be cut off at the halfway point. For example, Hijo de tigre sale pintado is usually simply expressed as Hijo de tigre…, since it is assumed that the listener will both know what is meant, and complete the sentence in their own head, if not out loud.

Another aspect that stands out is the use of God and the Devil in sayings; proof of the strong Catholic influence over Colombian and hispanic spoken traditions. In the above exercise, we learnt that God helps those who wake up early – Al que madruga, Dios le ayuda. Its secular English equivalent, is of course “The early bird catches the worm”. Other commonly used sayings include:

Le fue como a los perros en misa. Things went poorly for him, like a dog in mass.

La cara del santo hace el milagro. If you have to ask for a favour, doing it in person will yield better results.

Ni mucho que queme al Santo, ni poco que no lo alumbre. In reference to a candle on a shrine, it says not to place it too close to the saint because it might burn it, but not so far that it won’t shine a light on it. Not too much, not too little.

A cada marrano le llega su nochebuena. Each pig – think of the lechona you enjoyed this holiday season – has its Christmas Eve. Everyone has their time to die

Of course, love is also the subject of many wise sayings:

Un clavo saca a otro clavo. One nail takes out another nail, so a new love – AKA a rebound – is a good way to get over your last one. Wise words indeed!

Food, drinks, and animals round up the most popular categories:

Al que no quiere caldo se le dan dos tazas. An expression that describes Murphy’s law; if you don’t like something you’re bound to have to do it a lot.

Como mosca en leche. Don’t fit in / stand out – like a fly in a glass of milk.

Un burro hablando de orejas. A donkey talking about ears; figuratively a hypocritical person criticising others for something they do themselves.

And finally, a few words of advice:

A mal tiempo, buena cara. When life gives you lemons…

Hay que hacer de tripas corazón. When it comes to making a difficult decision, toughen up and act with your gut.

And most important of the Spanish proverbs, A lo hecho, pecho, because what’s done is done! 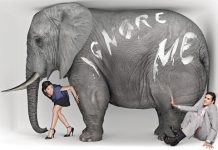 An idiots guide to idioms