The capital’s annual music showcase, Bogotá Music Market (BOmm), is the most important event for many artists in Colombia. More than just a show, it provides a useful space for making contacts and networking. We got quotes from some of the movers and shakers.

The sixth edition of the BOmm is organised by the Cámara de Comercio and will take place between September 12 – 15. It will bring together both national and international players from all over the music world.

Colombian music is ever more popular worldwide. No longer just Shakira and Juanes, Colombian artists are ever more known in many different genres. Bogotá is the centre of all this diversity, home to over half the entire country’s recorded music – a sector that provides revenue of about COP$300 billion (USD$100 million).

Related link: What’s in store for Bogotá in 2016

Over 250 bands from every corner of the country are going to be at BOmm this year. When we spoke to Canalón de Timbiqui, they claimed that their previous showcase in BOmm was one of the most important things in terms of reaching a wider audience. Having played extensively in Europe this year, including a hit show at Glasto, they’ve seen first-hand the benefits of the event. Singer Ariana Vallecilla told us, “We played 18 shows in Europe in seven countries, so the [BOmm] experience was really successful for us, that’s why we decided to come again.”

Glastonbury was a great experience, she says, “As we were on at one in the afternoon, which is difficult, but people were waiting for us, you know. People were very respectful, even though they didn’t always understand. In Colombia, I don’t want to be rude, but sometimes when Colombians don’t understand what they are seeing they lose interest or they leave because they don’t feel connected. In Europe we felt respect for something new. That is the difference, I think.”

That’s also true for Maite Hontelé, the renowned trumpeter. She’s arrived from the Netherlands to Bogotá via Medellín. She agrees that the music market is key to success in Bogotá. “It’s important for me, I’m an independent artist and these markets are very important for me to be able to promote my music to international and national bookers and promoters, but also to labels and to people in general. It’s a great market, it’s very well organised. I’ve been to a few, and I can say that the one in Bogotá, it’s very nice. It’s big, but it’s not too big. With this market you can talk to everyone personally, and that has more results.”

“I definitely think the market here is interesting,” says Hontelé, “The fusions are very interesting and the level is very high. Colombian bands now know how to sell their product. In the past it was not so clear what you had to do to draw the attention. Now they know the European market, the American market a lot more. There’s a lot more professionalism.”

A key part of BOmm is providing a place for the world to see Colombian music. Canalón de Timbiquí had the opportunity to play to foreign audiences, and there’s clearly interest from outside in having Colombians play. In fact, 82 representatives from 19 different countries are here to find out what Colombia has to offer.

Among them is Julia Gudzent, a German booker, who is excited to be coming to the market.  Before flying to Bogotá, she spoke to us from Berlin and told us, “I’m really excited to be coming to Colombia and to find out about some Colombian bands. I fly to Bogotá the day after Lollopalooza [Berlin] so I haven’t had the chance to listen to the bands yet. I hope someone will take me by the hand and show me the best bands.”

She’s a punk and rock promoter first and foremost, hence the involvement in Lollopalooza, although Julia quickly assures me that, “We have many events, so we’re looking for different types of music. We like punk, indie, rock, yes. But also pop, electronic music, hip-hop, I would say I’m open to most things. I would also be interested in traditional music.”

“I got the feeling that the music scene in Colombia is more developed than in other South American countries,” says Gudzent, “when I was in Mexico earlier this year, the Colombian guys seemed to have a lot of good shows, good artists, good festivals and a good music scene in general.”

“That was the impression I had of Colombia, more organised than other places,” he concluded. That’s why the Camara de Comercio, which organises the event, estimates that at least USD$2 million will change hands during the week and more later, as international festivals start adding a little Colombian rhythm to their line-ups. After all, this is their best chance to see these bands up close and personal.

Hontelé has a similar point to make, adding that “for me personally, and for my production company, the focus is international. The national level, we already know them. But the chance to talk to international people is unique, and it’s very difficult normally to talk to them. They’re very well known internationally, big festivals come here, for example Glastonbury.”

So, look carefully at festival line-ups, even abroad. You might just have the chance to see some of your favourite Colombian music even in the torrential rain of Somerset. 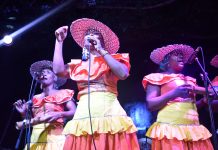