In Jorge Luis Borges’ celebrated short tale The Library of Babel, the author writes “Like all men of the library, I have travelled in my youth; I have wandered in search of a book, perhaps the catalogue of catalogues; now that my eyes can hardly decipher what I write, I am preparing to die just a few leagues from the hexagon in which I was born.”

According to a new graphic novel, Borges’ own life didn’t stray too far from where he began either.  In a straightforward telling of Borges’ life, Borges: The Infinite Labyrinth charts the Argentine writer’s unremarkable life from precocious child to scorned lover and, finally, to acclaimed writer. The book is told in 10 chapters with the script by Colombian writer Oscar Pantajo and illustrations by young Argentine artist Nicolás Castell.

For Castell, completing the book was the fulfillment of a childhood dream. Before speaking at a panel on comics at Santo & Seña in Bogotá, Castell told The Bogotá Post how surprised he was that Borges had such a wide reputation outside the continent but also recognised him as the “Cervantes of Latin America.”

“We are drawn to what we don’t know”: Artist Jorge Alderete talks of his obsession with Easter Island at Medellin Book and Culture Festival 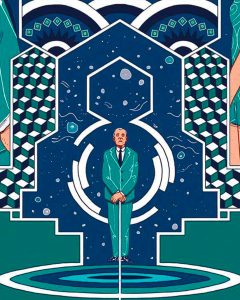 The story isn’t chronological but it is told sequentially, through simple frames that spans from his early jilted love with muse Norah Lange (an esteemed author in her own right) to the creation of his short story “The Aleph”, which Castell considers “his most emblematic”. Given the largely uneventful life he led in Buenos Aires, the authors did well to traverse Borges’ prodigious internal life and that darkly wild labyrinth: his imagination. Castell wrote recently that he attempted to humanise his subject, which he does with many fantastical and symbolic drawings that bring to life Borges’ cavernous imagination. “He did not have an epic life like that of other writers like Ernest Hemingway, but within his imagination he did have it and tried to merge the two things.”

Borges: The Infinite Labyrinth is out now on Rey Naranjo Editores. 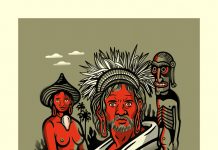 “We are drawn to what we don’t know”: Artist Jorge Alderete talks of his obsession with Easter Island at Medellin Book and Culture Festival