“It’s going to be hard to get in for a photo, there’s just too many people,” says a security guard in the melee outside Calle y Poché, clearly the top attraction at FILBo’s Sunday peak. I have flashed my press pass to get close to where the are meeting and greeting their legion of fans, but the cheering teenagers and young adults around me clearly all have the same idea.

In the end I settle for interviews with the fans outside, some of whom have camped the night at Corferias to get a glimpse of – and maybe even a book signed by – Daniela Calle and María José Garzón, a.k.a. Calle y Poché, two twenty-something Colombianas who have garnered over 6 million subscribers. They have just released their first book Si, Si es Contigo.

The book “explores the story of their own relationship,” explains Lorena, who has followed the couple online for three years. Like many I talk to in the crowd, Lorena is drawn to Calle y Poché they stand up for LGBT rights.

‘They are influencers giving a beautiful message to the community at large: LGBT persons are normal, they live a normal life.’

She’s with Santiago, who she met queuing for hours at FILBo and now counts as a friend. He says Calle y Poché gave him the confidence to build his relationship with his boyfriend. As well as the right-on messages, he also admires their creativity and sheer output on their YouTube channel.

“They’re very productive people who unite and inspire their followers all over the world, and a great reference point for people to learn above love,” he says.

Calle y Poché are currently considered the most popular Colombian youtubers. The duo first met as youngsters at Misi, Bogotá’s prestigious school for dramatic arts. Their friendship grew over the years. In time they became a couple, as revealed on their YouTube channel, and now detailed in their book.

Their openness about their sexuality has hardly hindered their online career; in fact it has propelled them to greater heights. They won the “Newest Face” award on MTV Mia, stood with (then) president Juan Manuel Santos to launch LGBT inclusive spaces, and this year were the celebrity couple on the front page of Mexico’s Tu magazine’s Valentine special.

Their output of hundreds of online videos covers the usual range of lifestyle topics affecting youngsters today – dance, fashion, music, relationships – filmed in a choppy style that confounds older viewers like myself. But there are clear flashes of genius, such as their ‘Roast Yourself Challenge’ video with its strong message of inclusion, and a healthy dose of self-parody.

“They’re breaking barriers and overcoming homophobia,” says Susén, showing me her signed copy of Si, Si es Contigo. But their appeal goes way beyond the LGBT community. Calle and Poché are “inspiring everyone to be proud of their differences and comfortable with who they are,” says Susén.

In fact, among the happy crowd are dads with and the odd grandparent. I chat to Luz Adriana and Jimmy, a hetero couple who follow the dynamic . “They teach us how to get ahead. How to be proud and fun,” says Luz Adriana.

Hours have passed and Calle y Poché are still somewhere on their podium hidden behind a human wall, busy signing books for their fans. I can’t help but admire their stamina – and that of their fans – and feel the good vibes in this busy corner of FILBo. They truly are an inspiration. 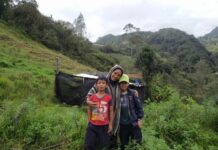