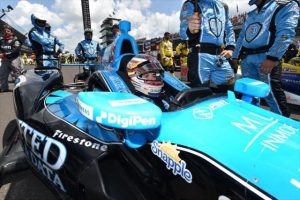 Bogotano Carlos Muñoz claimed second place at one of the biggest motorsports stages on the block, the Indianapolis 500, behind rookie and surprise winner Alexander Rossi

On one of the biggest motorsports stages around, Carlos Muñoz claimed second place at the 100th running of the Indianapolis 500, behind rookie and surprise winner Alexander Rossi. The 24 year-old from Bogotá came 4.5 seconds short of taking the title. Muñoz had a decent qualification, starting at fifth place on the grid.

Muñoz took the lead six laps before the end, but ran out of fuel and had to come in for a fuel stop two laps later. His teammate from United Fiber & Data Honda took over and held the lead until the finish line. “I was really disappointed when it comes to fuel strategy and you lose the race because of that,” Muñoz said.

Defending Indy 500 winner Juan Pablo Montoya had a difficult day in Indianapolis. The 40 year-old bogotano came off the grid in 17th position and finished 33rd after crashing his Verizon Team Penske Chevrolet on Lap 64, becoming just the third reigning winner to finish last at the Indy 500.

“I started making up some ground again and the car was actually pretty good,” said Montoya. “I went into turn two with a big push and, when I got on the gas, it just came around. It’s just disappointing. Our Verizon Chevy was really good. Just a tough day.”

The other participating Colombian, Gabby Chaves, finished an anonymous race in 20th place.