The Chapinero neighbourhood of Bogota has not seen a single homicide for four months, police statistics released last week revealed.

According to figures provided by the National Police, there has been a 30 percent reduction in homicides in the area, from 13 cases in 2013 to nine in 2014. The homicide rate currently stands at 6.6 murders per 100,000 inhabitants, figures show.

“We want the public to help us update our daily ‘life counter’, a banner that has been placed in [my] office to show it is possible to live and coexist in peace,” Chapiner District Mayor Mauricio Jaramillo said.

The figures sparked controversy among city council representatives, who said that while murders are down, robberies are up five percent, and people who live in Chapinero continue to feel unsafe. 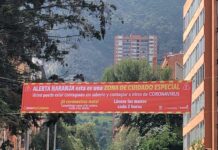